The Moonlight Scimitar is an item from The Legend of Zelda: Breath of the Wild. It was originally a ceremonial sword used by the Gerudo and features delicate Gerudo carvings that make the blade extremely sharp. Link can equip it and use it as a single-handed sword. One is worn by the Blue Hinox that sleeps on Digdogg Suspension Bridge. One is lodged in the Stalnox on Eastern Daval Peak which Link can obtain by defeating it. Both respawn with them after a Blood Moon. Additionally one also spawns inside a hidden cave concealed by Boulders in the Gerudo Highlands northwest of Gerudo Tower and will occasionally respawn if Link leaves Gerudo Highlands and returns later. The hidden cave contains other equipment such as a Gerudo Spear, Golden Bow, Edge of Duality, and Radiant Shield along with three Treasure Chests.A Treasure Chest containing one may randomly drop when certain Amiibo are used with the Amiibo Rune such as the Urbosa amiibo.

Gerudo Captain Teake wields one along with her Radiant Shield. The Radiant Shield can be seen as a companion to the Moonlight Scimitar as its the second strongest Gerudo made shield. 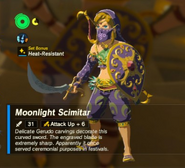 Retrieved from "https://zelda.fandom.com/wiki/Moonlight_Scimitar?oldid=542176"
Community content is available under CC-BY-SA unless otherwise noted.