Zelda Wiki
Register
Don't have an account?
Sign In
Advertisement
in: Items, Jewels, Items in A Link to the Past, Items in Four Swords Adventures 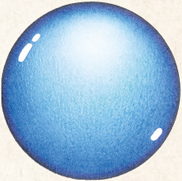 The Moon Pearl is a shining gem which protects Link from Ganon's magic, allowing him to retain his normal shape while in the Dark World.[2][3] Other humans entering the Dark World are transformed into shapes which reflect their "True Nature", or personality. This is shown by the pair of men on Death Mountain, as well as Link himself. The Bully is transformed into a demon-like creature because of his devilish nature, and the Bully's Friend turned into a ball because he could never make up his mind. Link's "true nature" is represented by a pink rabbit. The Moon Pearl can be found in the Tower of Hera.

Unlike their predecessor in A Link to the Past, there appear to be more than one Moon Pearl, and while their functions also seem to differ, they are both related to the Dark World. They are sometimes given to the Links, who have the distinct ability to sense Moon Gates, by civilians in hope of being saved.[5] In dungeons, they're often found in Treasure Chests and are usually required to solve certain puzzles.

Jewels in The Legend of Zelda series
Community content is available under GNU Free Documentation License unless otherwise noted.
Advertisement