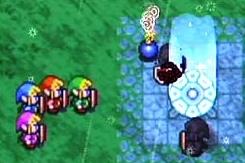 A Dark Link battle near a Moon Gate

Some Moon Gates are activated by default, but most will require a Moon Pearl to operate. Moon Gates are frequently obscured by grass patches and dungeon flooring, or even under blocks of sidewalk. An area that yields a Moon Gate is distinguishable by an audible shimmering sound and visual twinkle when Link is near, which serves as a separation from the surrounding landscape. When holding a Moon Pearl near a hidden Moon Gate, the Pearl will shatter and the Gate will reveal itself. The first Moon Gate appears in the Village of the Blue Maiden, and its constant incorporation into puzzles and battles becomes a staple throughout the rest of Link's journey, encountering them as far into Link's voyage as the final stage, the Realm of the Heavens.

During Dark Link battles, the Dark Link clones often switch between the Dark World and Hyrule via these Moon Gates, which operate to separate the two battlegrounds where Dark Link can be fought. However, though common during Dark Link battles and in Hyrule's overworld, in the side-scrolling stages such as the Tower of Winds, Moon Gates do not exist. In the same vein, outside of Four Swords Adventures, Moon Gates are nowhere to be found, but have properties that exist in similar contemporary objects such as the Mirror of Twilight in Twilight Princess, a vessel that can also transport Link to a netherworld.