Skyward Sword
A Link Between Worlds

"You got a Monster Horn! This well-crafted horn is made of sturdy animal bone. You might find a use for this as a material."
— In-game description

Monster Horns are recurring items in the Legend of Zelda series. They can be collected in a variety of ways, most commonly from defeating certain enemies. Their use often varies between titles, though they are most commonly depicted as either the shed horns of monsters or a horn made from animal bone used to rally or summon other enemies.

"Some Bokoblins carry a Monster Horn on their waist. If you latch on to it and pull with your whip, it is possible to claim it for yourself."
— Fi 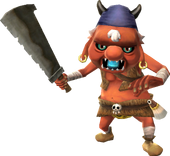 Link can bring Monster Horns to the Scrap Shop at the Bazaar in order to upgrade his equipment. They are dropped by Bokoblin leaders, who use the horns to summon other Bokoblins; Link can also use the Whip to pull the horn out of the Bokoblin's hands or belt. If Link can pull the horn out away from the Bokoblin before it can be blown, then he can prevent it from calling reinforcements. In the later stages of the game, Link may encounter Bokoblin Leaders that do not carry Monster Horns and sometimes he may encounter them being carried by Blue Bokoblins, who use them to summon these Monster Horn-less Bokoblin Leaders. 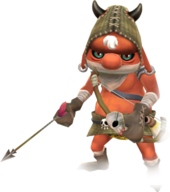 Some Bokoblin Archers (like the ones encountered on the Sandship) carry them as well, but their Monster Horns are used to alert other Bokoblin that Link is in the area. One Monster Horn appears inside a Treasure Chest inside the Lanayru Caves where Link meets the Goron Golo. Retrieving it from the chest causes Fi to point out how Link can use his Whip to steal them from the Bokoblins that carry them. Monster Horns are used for multiple item enhancements. They are needed for both stages of upgrade to the Small Quiver, and for upgrading the Divine Shield into the Goddess Shield. They can also be sold to Rupin for 30 Rupees each on certain nights.

"You got a monster horn! Ouch. Watch that you don't hurt yourself on that thing!"
— In-game description

Monster Horns are potential spoils from enemies in Lorule. The Witch will brew Link a bottle of Yellow Potion at the Witch's House if he brings 10 Monster Horns to her.

In Breath of the Wild, Monster Horns are used by Bokoblin and Lizalfos sentries on watchtowers or other elevated areas to sound the alarm and warn their allies that Link is nearby when they spot him. However they will not blow their horns if they spot him while he is wearing a Bokoblin Mask (affects Bokoblins only), Lizalfos Mask (affects Lizalfos only), or Majora's Mask (Bokoblins, Moblins, and Lizalfos), however Link's disguise will fail if he attacks them or any of their allies or if the mask he is wearing only affects one type of enemy and he is spotted by an enemy that it does not affect (even Majora's Mask can fail if he is attacked by a ChuChu, Pebblit, or Keese as the mask does not effect them).

Most sentries that wield them carry bows in order to attack Link from their vantage point. The only way to stop them from blowing their horn is to kill or attack them, though this may alert other sentries. Like other enemies, Sentries have a "?" mark gauge that appears over their head that slowly fills when they notice Link, forcing him to seek cover, get out of their field of vision, or kill them before they are completely alerted to his presence and blow their horns which is indicated by being a yellow "!" exclamation point that appears after the "?" mark gauge fills. When wearing a mask that disguises Link, this still occurs but the disguise (if they are affected by it) will causing them to view Link with curiousity rather than as a threat and will continue to watch his movements from their vantage point, which means Link must be careful not to do anything that will cause his disguise to fail, or they will realize he is a threat and blow their horns, alerting their comrades. Unlike other enemies, sentries stand watch over camps at night, while the others (Bokoblins and Moblins) sleep, as Lizalfos do not sleep. Link can identify sentries by the monster horns they carry, especially the ones not standing on watchtowers.

Unlike past titles, these Monster Horns cannot be obtained or used by Link himself. Monster Horns carried by Bokoblin resemble the horns used in Skyward Sword, however the ones wielded by Lizalfos resemble conch shells.

Similar to the Bokoblin Leaders in Skyward Sword, Bokoblin Summoners use their large Monster Horns to summon more enemy units onto the battlefield. Additionally, they will also use them as an improvised weapon to attack their opposition. They are also wielded by Bulblin Summoners, who use them in the same manner as Bokoblin Summoners.

Monster Horns appear as Miniblins Bronze Material drop. Interestingly, this version of the Monster Horn is depicted as a the shed horn of a Miniblin.

Retrieved from "https://zelda.fandom.com/wiki/Monster_Horn?oldid=540327"
Community content is available under CC-BY-SA unless otherwise noted.