Fang and Bone
Reward for saving Chabi from monsters

"A result of Kilton's research into monsters, this suspicious spice can be used to punch up dishes while cooking. Apparently it can be used to make a number of monstrous meals."
— In-game description

The Monster Extract is an item from The Legend of Zelda: Breath of the Wild. It is a special spice ingredient. Link can purchase it at the Fang and Bone for 9 Mon after having met Kilton at Skull Lake at night. Link can also obtain it as a reward by rescuing from monsters the Hylian traveler Chabi searching for the Kilton's shop.

As it is a spice made from Kilton's monster research, it is classified as a "Monster Part" ingredient, along with Monster, Guardian, and Dragon parts. Link can thus sell it to Kilton for 2 Mon. However, it cannot be used to as a Monster Part to create Elixirs as cooking it with any critter results in Dubious Food. Link can cook with it to prepare "Monster" based dishes, and the amount of hearts restored is randomly determined when it is cooked.

"Monster extract is an ingredient that boosts the effects of any dish that it has been added to. With just one monster extract, you can raise the power and duration of the effects of your dish. However, you never really know quite how the dish will turn out. Sometimes it will raise the effect by a lot, and other times... Well, not so much. However I, Aurie Taamu, am not a man who relies solely on luck!"
— Chef Aurie Taamu, Vol. 2

Aurie Taamu notes it can randomly boost the power and duration of effects of dishes though it can also result in food that restores very little health thus it results tend to be based on luck. The Castle Library Book recipe for Monster Cake and Chef Aurie Taamu, Vol. 2 section on Monster Extract imply Kilton is not the first person to develop this monstrous spice which has apparently been around in Hyrule since before the Great Calamity as the Royal Family of Hyrule has a recipe for Monster Cake. However knowledge of monsters is apparently required to make it thus implying monster researchers like Kilton existed before the Great Calamity. 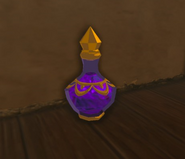 Retrieved from "https://zelda.fandom.com/wiki/Monster_Extract?oldid=539034"
Community content is available under CC-BY-SA unless otherwise noted.