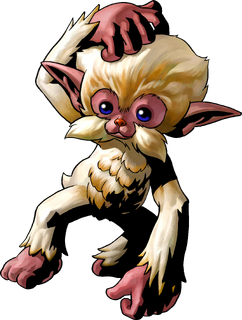 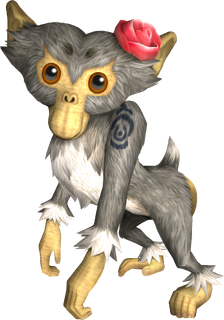 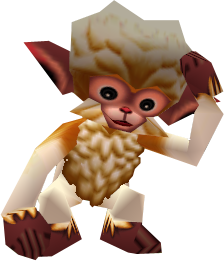 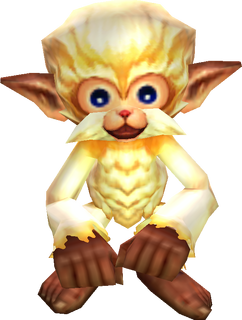 Monkeys are a recurring species in The Legend of Zelda series.[1]

In A Link to the Past, a Rupee-loving Monkey named Kiki appears in the area outside of the Palace of Darkness.[2] He asks Link for 10 Rupees, after which he will follow Link to the palace and open the entrance for another 100 Rupees. If he is hit by an enemy, Kiki will run away, forcing Link to leave and pay him another 10 Rupees to follow him.

In Link's Awakening, a red Monkey appears as an enemy in Toronbo Shores, sitting on one of the palm trees. It throws coconuts and Bombs at Link. It can be jostled out of the Tree with the Pegasus Boots. Only one of its kind appears.

Another Monkey named Kiki also appears southwest of Kanalet Castle, standing in front of the moat.[2] Kiki plays an important part in the Trading Quest and in accessing the castle. After Link gives Kiki the Bananas, Kiki calls a large group of fellow Monkeys to build a bridge, allowing Link access to the Castle. They leave a Stick on the finished bridge after they depart.

In Majora's Mask, several Monkeys live in the Southern Swamp region. One Monkey is found in the Woods of Mystery. He guides Link through the passages and finally to the injured witch Koume, whom Link has to heal with a Red Potion given to him by Kotake.

After helping Koume, three Monkeys approach Link upon exiting the Woods of Mystery. They ask Link to rescue their brother, the Foolish Monkey, from the Deku Palace, where he is being locked up for allegedly kidnapping the Deku Princess.[3] With the help of a Magic Bean, Link reaches the falsely accused Monkey by flying across the palace's walls as Deku Link.[4] The Foolish Monkey, who speaks significantly better Hylian than his brothers,[5] teaches Link the "Sonata of Awakening", which grants him access into the Woodfall Temple.[6] When the Deku King overhears them playing a melody that only the Deku Royal Family knows, he believes it is proof that the Monkey deceived the Princess to enter the Temple and punishes him.[7]

After rescuing the Deku Princess, Link brings her back to the Deku King. The Foolish Monkey is set free and thanks Link for his brave efforts.[8]

In Oracle of Ages, several Monkeys appear in the Forest of Time, among several other Animals. One Monkey calls the forest the animals' utopia,[9] and another mentions of building a paradise. A female Monkey wearing a bow expresses her desire to be a princess, and admires Princess Zelda.[10] When Veran possesses Nayru and travels into the past, the monkeys are turned to stone and vanish. After Link and Ralph save Nayru from Veran's control in Ambi's Palace and return to the present, the monkeys reappear in the forest.

In Twilight Princess, several Monkeys live in the Faron Woods area. They appear to be intelligent and friendly toward humans.[11] At first, they are a menace in Ordon Village, where one steals Uli's cradle which Link must retrieve with the help of a Hawk.

Link eventually encounters more Monkeys at the Forest Temple, where Link finds that eight Monkeys have been captured at various points within and must be freed. In return, the Monkeys assist him by climbing on Ropes and swinging him to far away platforms. Once Link saves four of the Monkeys, they lead him to their leader, a large baboon named Ook. Ook had been turned evil by a parasitic arachnid (possibly from the Twilight) and throws the Gale Boomerang at Link from columns situated around the room. Once defeated, Ook loses his parasite and drops the Gale Boomerang for Link to pick up. Later, Ook helps Link defeat Diababa by swinging back and forth with a Bombling in his grip, allowing Link to use the Gale Boomerang to blow it into the boss.

Monkeys are seen in a few other places in Faron Woods, either in need of help or willing to help Link in his quest.

In Freshly-Picked Tingle's Rosy Rupeeland, a female baboon helps Tingle cross a gap by letting him use it as a bridge.

In Ripened Tingle's Balloon Trip of Love, a Monkey named Masaru appears on Page 6 and Page 7. Tingle can use Bananas to lure him down from a tree. Masaru temporarily accompanies Tingle on his quest.