Zelda Wiki
Register
Don't have an account?
Sign In
Advertisement
in: Breath of the Wild Pages with Invalid or Missing Terms, Hyruleans, Sheikah,
and 8 more
English 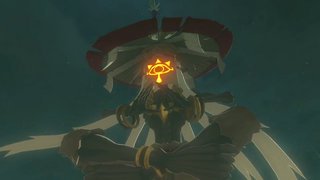 Breath of the Wild
The Divine Trial[1]

Monk Maz Koshia is the final boss in The Champions' Ballad DLC for Breath of the Wild,[4] located in the Final Trial.

Monk Maz Koshia is a Sheikah Monk who appears in the "EX The Champions' Ballad" Main Quest. Monk Maz Koshia's goal is to test those who wish to undergo the Divine Beast Tamer's Trial.[5] He first speaks to Link inside the Shrine of Resurrection, where he bestows the One-Hit Obliterator to Link as the first part of his Trial.[6] He informs Link that to complete this part of the Trial, he must travel to the four marked locations on the Great Plateau and defeat the bands of enemies there.[7]

After Link has done this, Monk Maz Koshia will congratulate Link on his progress and reveal that this task was the first of many in the Trial. The Monk continues, saying that the One-Hit Obliterator will guide him to the next steps.[8] This causes the One-Hit Obliterator to split into four glowing orbs, which scatter to various parts of Hyrule. Monk Maz Koshia urges Link to follow them in order to continue.[9]

Upon reaching Monk Maz Koshia, he once again greets Link, revealing the end of his final trial.[15] Monk Maz Koshia stands up and teleports the two of them away to a platform in the sky, where they must do combat.[16]

After Monk Maz Koshia's health has been reduced by 25%, he will retreat and split himself into nine copies. Each of these copies can damage Link, though only one of them can sustain more than one hit. In order to advance, Link must find the correct copy of Monk Maz Koshia and attack him. The copies will work in unison to attack Link, until they are destroyed. When all of the copies have been destroyed, Monk Maz Koshia may summon another set of them.

At some point, Link can ground Monk Maz Koshia. If Link gets close to Monk Maz Koshia's feet, the Monk will stomp the ground, damaging the Hylian Champion. Monk Maz Koshia can also summon two miniature copies of himself, who will attack Link in a similar manner to the second phase of the fight.

Once during the battle, Link can distract Monk Maz Koshia with Mighty Bananas, leaving the Monk temporarily vulnerable to attack.