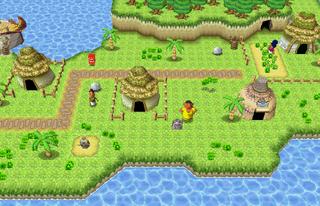 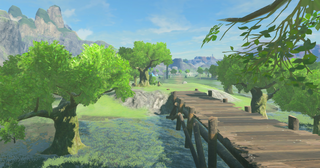 Molida Island is a recurring location in The Legend of Zelda series.[1][2]

Molida Island is an Island in the Southwestern Sea in Phantom Hourglass. The southern portion of the Island is populated, whereas the northern territory is a wild grove. The Wayfarer's Words can be found scattered throughout the Island, which many of the inhabitants find to be a nuisance.[3] The Shovel can be found in a cave on the Island, which is required for finding a safe route through the foggy passage in the Northwestern Sea. Molida Island also bears the Temple of Courage, which can be found on the back of the isle. To access it, Link needs a Salvage Arm from Eddo on Cannon Island, as Link needs the Sun Key, which is hidden underwater. Before Link can return to Molida Island with the Salvage Arm, a Giant Eye Plant will appear and guard the Island.

Molida Island is also where Link will find the Archery Game, which is unlocked after clearing the Temple of Courage. In addition, three small portions of land east of the Island can be accessed by blowing up a Wooden Box, or by making a ropebridge between the wooden box and the stone sign, retrieving the Cucco within with the Grappling Hook, then using the Cucco to fly there. With the help of the Shovel, a Treasure Map can be unveiled from the ground at the roots of a tree on the second small island. On the smaller island to the left of the treasure map, there is a smaller island that has a Big Red Rupee which can be obtained by using the shovel in the middle of the island.

Molida Island is located in the Lanayru Wetlands in Breath of the Wild.

Molida Island is named after Mollweide projection, a technique for displaying maps.[4]