This article is about the trap. For the character in Ancient Stone Tablets, see Mole (Character). 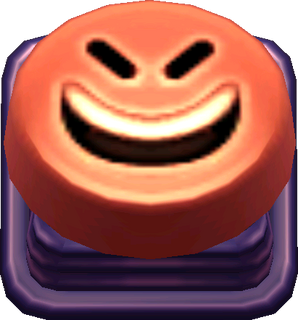 Hammer
Moles are recurring traps in The Legend of Zelda series.[1]

In A Link to the Past, Four Swords Adventures and A Link Between Worlds, Moles resemble like Whac-A-Moles, residing in small holes in the ground and bouncing up and down. Moles do not actively cause damage to Link, and simply block his progress. They appear in caves and dungeons, their faces locked in constant laughter, and impede access to certain areas. The only way to bypass a Mole is to hit it with the Hammer, which squashes Mole into the ground and allowing Link to get past.

Moles are found mostly in the Tower of Hera in A Link Between Worlds, and are used to spring Link upward to different platforms in the dungeon. Big Moles are also seen, and they launch Link to higher floors. When Link hits a Mole into the ground it will freeze for a few seconds and then shake right before spring back up and launching Link upward.

Moles appear similar to A Link Between Worlds and again propel the Links to a higher area in Tri Force Heroes. In some Stages there are Moles with extra-tall springs, which can only be struck by a Magic Hammer when the Links form a Totem of a matching height.