Zelda Wiki
Register
Don't have an account?
Sign In
Advertisement
in: A Link to the Past (Barcode Battler II) Pages Lacking Name References, Nightmares, Worm-Like Enemies,
and 10 more 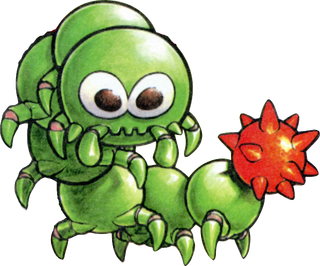 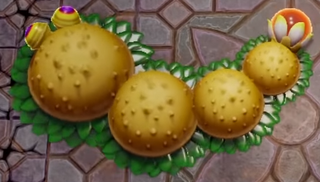 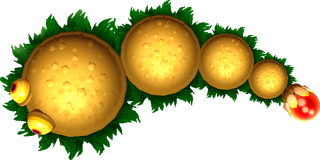 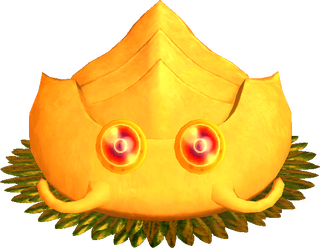 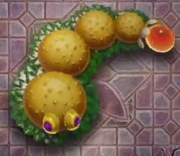 Moldorm,(ALttP | LA | LADX | ALBW | TFH)[1] also known as Big Moldorm,(FSA)[1] is a recurring Boss in The Legend of Zelda series.[name reference needed] They are a much larger version of the common Moldorm.

Moldorms made their first appearance as a boss in A Link to the Past. It first appears at the very top of the Tower of Hera and is an infamous boss battle, due to the fact that Link may have to face it many times before he can finally defeat it. The battlefield is unique in the game in that it has no boundaries, meaning that the boss can send Link to lower floors if he is unluckily pushed from the edge by the foe. The Moldorm will actively charge at Link, and has a springy, bouncy body similar to a Hardhat Beetle or a Bumper. Striking it with his sword or getting hit will send Link flying. If Link falls to the lower floor, the entire boss battle will restart; as the boss recover to full health when Link returns.

To harm the monster, he must strike its vulnerable tail; the very tip has a twirling red weak point that causes damage to the monster when struck. The monster requires just six hits with Link's Fighter's Sword to destroy, but its erratic movement makes this extremely difficult. Not only that, but when the monster is close to defeat, it will speed up dramatically, making avoiding and striking the monster more a matter of luck than judgment. While falling from the battle will not harm Link, taking hits from the monster will. The floor below contains a large number of jars that hold Hearts, so Link can continue his attempt to destroy Moldorm over and over until he finally succeeds and obtains the Pendant of Wisdom.

The Moldorm makes a reappearance in Ganon's Tower, only the battlefield is shaped differently, making it harder to defeat; the floor below contains spikes that Link might fall on to as well. However, if Link has the Golden Sword, he can kill this Moldorm in just two hits.

In Link's Awakening, Moldorm appears as the first of the Nightmares that Link must face in his quest to wake the Wind Fish, and resides in the Tail Cave with many Mini-Moldorms and guards the Full Moon Cello. Unlike its previous appearance, it has large mandibles and is able to speak, albeit between loud buzzing.[2] As one of the Nightmares, its desire is to destroy the outsider, Link. Like its previous appearance, it tries to drive Link off the platform the battle takes place upon. The arena is much smaller than before, and Link has no easy way to heal himself if he takes damage; not only that, but with only three Heart Containers, Link will be defeated in only three hits. The Moldorm will take less hits than before, but will charge wildly around after being hit with the sword, before slowing down again (unless it's the final hit, where he will continue to move extremely fast until defeated). The best method to defeat the monster is to use the Whirling Blade Technique. Only two strikes from this move will defeat the monster.

Moldorm returns as the Boss of the Tower of Hera, but guards the Pendant of Power instead of the Pendant of Wisdom. It is fought in the same manner as in A Link to the Past, except that it does not regain its health if Link is knocked off the platform. Moldorm's only attack is to glide around the area in an attempt to bump Link off the platform to the floor below, where a series of Blade Traps guard several recovery Hearts.

A stronger, purple Moldorm appears as one of the Sub-Bosses in Lorule Castle. Instead of having no walls, its arena has walls that contract and recede, giving Link less room to maneuver. The difficulty of this fight can be mitigated if Link has the Red Mail and Master Sword Lv3. Link can also opt to remain on the platform above the Boss floor and throw Bombs down into the arena, causing damage to Moldorm if their explosions hit its tail.

In Tri Force Heroes, Moldorm appears as the boss of the Fire Temple Level. In a first for the series, this giant Moldorm appears to be mechanical in nature rather than organic—including with bright, colored headlights for eyes and sounding as though it runs on treads. It is fought in a caged enclosure suspended over a pit of lava. Like its other incarnations, it crawls around the area while making sharp turns. Moldorm's eyes will emit green, red, or blue light, and it will pursue the Link whose tunic matches the current color of its eyes. If this Link is hit, Moldorm's will briefly retract its segments and it will follow a differently colored Link. Three lava pillars beneath the platform will also periodically rise through the red, circular grates that appear on the floor of the platform. They will harm any of the Links who come in contact with them.

The Links must avoid both Moldorm and the pillars of lava while aiming for the creature’s glowing tail and striking it with the Sword. The Link who matches the color of its glowing eyes can lure the Moldorm away, while the other Links aim for its tail. After being struck, its tail will be temporarily encased in a protective shell and it will start to move faster. Eventually Moldorm's tail will glow a bright red and is held higher up, requiring that two of the Links form a Totem in order to reach and strike it. Eventually after taking enough hits, Moldorm will go haywire and quickly move about erratically in its enclosure, raising its tail even higher. The Links must then form a Totem of three to strike its tail; this blow will finish the monster off.

In the A Link to the Past comic by Shotaro Ishinomori, the Moldorm Link fights in the Tower of Hera appears as a giant spider as opposed to the centipede-like monster fought in the game. When the monster's illusion appears in Ganon's Tower, it is still called a Moldorm.[3]

The Moldorm first appears in Chapter 4, where it ambushes the young hero from above. Link strikes it in one of its eyes with his blade, and upon being told that the Pendant of Wisdom is inside the beast's eye, Link reaches for it and takes it, restoring his cursed arm.[4] Now with all the Pendants of Virtue in his hand, the monster tumbles defeated to the bottom of the tower and breaks Link's fall as it hits the ground.

In the Link's Awakening manga by Ataru Cagiva, Link fights Moldorm at the end of Tail Cave. After failing to damage its tough body with his Sword, Link is tackled off the platform, saving himself by stabbing his Sword on the edge. After pulling himself back up, Link uses a Spin Attack on Moldorm's tail to defeat it, revealing the chamber with the Full Moon Cello.

The Moldorm briefly appears in the A Link to the Past manga by Akira Himekawa as well, this time in a much more accurate depiction. Link is shown fighting off the giant centipede as he runs up the Tower of Hera. He manages to slice through one of its pincers and continue his dash up the winding stairway to the Pendant of Wisdom, hanging from the hand of an elegant statue at the very top. Upon collecting the final Pendant, he is mysteriously warped to the Lost Woods.