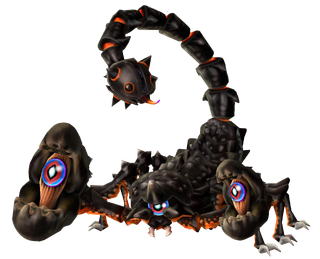 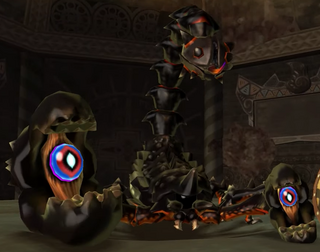 Moldarach is a Boss in Skyward Sword.[1] An Aracha that has reached the age of one thousand years,[2] two of them appear throughout the game; one as the main boss of the Lanayru Mining Facility and is overall the third boss of the game, and another later encountered at the Lanayru Shipyard in the Lanayru Sand Sea as a mini-boss.

Link first battles a Moldarach in the Lanayru Mining Facility. As Link enters the dungeon's disused room, the Moldarach springs out of the sand filling the room, and attacks.

Moldarach will defend itself with its claws, but once it drops its guard to attack, Link must slash the eyes inside the claws in the opposite direction that the claws are guarding; if the claw opens vertically, Link must slash it horizontally, and vice-versa. After slashing the eyes, one of them will turn red and Moldarach will then attempt to grab Link. The young hero can break free by shaking the Wii Remote and Nunchuk (or both Joy-Cons in the Switch remake), but if he takes too long to escape Moldarach will stab Link with its stinger. The Slingshot is helpful during this phase of the battle, as its pellets stun the eyes temporarily so the young hero can proceed to inflict damage to them.

After hitting a claw enough times, it will fall off, and Link must then do the same for the remaining claw. Moldarach will then burrow under the sand and try to attack with its stinger by jabbing it at Link, although this attack is easily avoidable with a backflip or a side jump. Link must blow away the sand covering the arachnid with the Gust Bellows to force it out of the ground. Its eye will turn red when it begins to charge its stinger attack, which is the Critical Point that Link must stab until it falls.

Another Moldarach is fought in the Lanayru Shipyard, and is fought using the same strategy.

Moldarach's name seems to be a portmanteau of mold, a term used throughout The Legend of Zelda series to denote enemies with a long or noteworthy tail (e.g. Moldorm, Twinmold) and often an affinity for sand, and "arachnid".