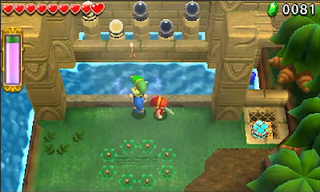 The Moblin Base is a fortress situated within a forest, run by Moblins and various other enemies.

Stage 1 starts the Links off on in the clearing of a forest. They each stand on a tree stump, below a cliff. The cliff can be climbed using one of the two leaves that ascend once a Link stands on it. The leaves disappear once reaching their destination, but soon regrow after in their initial spot. Atop the cliff are a pair of Bows and a Bomb, partially surrounded by bushes. Once each Link has an item, the Triforce Gateway activates. Ahead of the Links are two elevated ledges. The left one can be accessed using a ramp, after using Bombs to blow up the rocks blocking the way, while the right one can only be accessed via throwing a Link onto it. Ahead of the ledges is a river, with two elevated Switchs on the other side of it, and a series of totems blocking the way across. The Switches are too far and too high to be activated with the Sword, so the Links must use Arrows. By forming a two-Link Totem on either ledge, one of the Switches can be shot at, after which the top Link must be quickly thrown to the third Link on the other platform and shoot the second Switch before the first deactivates. Doing this fast enough causes the totems to lower, allowing the Links to walk on top of them in order to cross the river and reach the Triforce Gateway. Bushes, Rocks, and grass litter the Stage.

Stage 2, once reached, immediately greets the Links with several enemies. The Links appear in the southeast part of a clearing, with a stone structure standing in the middle of the Stage and enemies all around it. The structure can be entered via a staircase on its south side, and the unactivated Triforce Gateway and a Squiddy can be found. In order to reach the southwest part of the Stage from where the Links begin, a chasm must be crossed using the log that rests over it. After descending a ramp, four Buzz Blobs can be found throughout the Stage’s west side. On its north side, after climbing another small ramp, two Life Likes and another Buzz Blob can be found. On the east side, there are three Totem Dekus: two require the use of a two-Link Totem, while the third requires the use of a full Totem. However, by standing on the various ledges around the Stage, the Totem Dekus that stand two levels-high can be attacked with a single Link, while the Totem Deku standing three levels-high can be attacked with only two. Once every enemy is defeated, the Triforce Gateway activates, and three more staircases appear on the north, east, and west sides of the stone structure. In the north and northeast parts of the Stage, two parts of the cliff side can be blown up using Bombs, and both reveal a Treasure Chest that each contain a red Rupee. Bushes, rocks, and grass litter the Stage.

Stage 3 starts the Links off on one side of a river with two Blobs. The river can be crossed using a small log, and on the other side are two Buzz Blobs, a Life Like, and a Deku Scrub. A large bridge can then be used to reach a higher ledge on the first side of the river. A Moblin and locked door can be found here. To the east, another log can be used to cross the river as it turns, and a Moblin walks along the log. In this final portion of the Stage, a Switch lies under a grate to the northeast, and can only be activated with a Bomb blast. Once activated, a gate in front of it opens, revealing five more Switches. Three can only be reached using a two-Link Totem, while the other two can be reached by one Link alone. The Switches rest on pillars in the river, and are too far to be reached with the Sword. All five must be activated within a few seconds, and once they are, a Key appears on a platform in the river, and another platform rises in the middle of the river. The key can only be reached by tossing two Links onto a platform near it, then tossing one Link from there. The third Link must then throw the key to the Link on the middle platform, who must then throw the key to the Link on the other side of the river, who can then carry it back to the locked door. Beyond the door is the Triforce Gateway. Two Hearts rest on the platform where the key appears, and bushes, rocks, and grass litter the Stage.

Stage 4 places the Links in a small, foggy area, with a stone path ahead of them. This path leads into a stone structure below, and once the Links enter, three Moblins appear, one of them atop a Totem Armos. On either side of the Stage, Hearts can be found on elevated platforms that need to be tossed onto. Two Moblins also stand on wooden lookout towers, and can only be reached by throwing the Link atop a full Totem, or by that Link throwing a Bomb. Once the three main Moblins are defeated, three more appear. This time, two of them each ride a Totem Armos. Once this second wave is defeated, the final wave appears, which consists of two more Moblins, one of which rides atop two Totem Armos. Once every Moblin is defeated, including the two on the lookout towers, a staircase appears and a doorway at the top of it opens, revealing the Triforce Gateway. At the top of the staircase and to the left, a Link can be thrown on top of an elevated ledge to find a chest with a red Rupee inside.

Moblin Base includes the following Drablands Challenges: "Pop all balloons!", "Defeat all foes sans sword!", and "Transport the orb quickly!!".

In “Pop all balloons!”, several balloons float around each Stage, and the Triforce Gateway will not activate until every one is popped. The balloons float at different elevations, requiring various Totem formations to reach.

In “Defeat all foes sans sword!”, the Links are unable to use their Sword. All enemies in a Stage must be defeated by other means before the Triforce Gateway is activated.

In “Transport the orb quickly!”, the Links are given a time limit and an orb. On top of completing the Stage’s normal objective, the orb must be placed on a pedestal near the Triforce Gateway before the Links can advance, and the Level must be completed within a limited amount of time. Hourglasses can be found around Stages that increase remaining time when picked up.