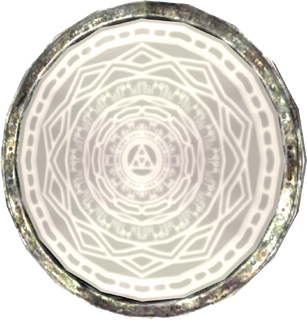 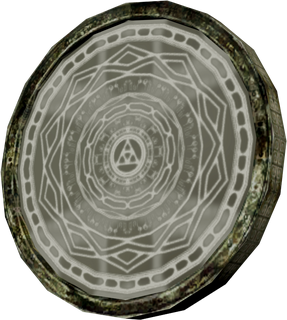 The Mirror of Twilight was made so that only the true ruler of the Twilight Realm would be able to completely shatter it.[13] Should an usurper try to destroy the mirror, he would only be able to break it into shards, thus proving the false kingship.

The mirror functions along with a black stone otherwise known as the Portal Stone. The mirror itself acts as a kind of projector that emits light into the Portal Stone, which activates the portal to the Twilight Realm.[14] When a person steps on the plate in front of the Mirror of Twilight, it will create a set of stairways that will allow said person to walk up to the circular platform that will warp them to the Twilight Realm with the help of the light transmitted by the mirror.

The Mirror of Twilight is first mentioned in the game when Link as a wolf takes the gravely injured Midna to Princess Zelda at Hyrule Castle. Thinking that she is about to pass away, Midna asks that Princess Zelda tell Link where to find the Mirror of Twilight.[15] Midna, after having been saved by Zelda's powers, asks Link to help her find the Mirror of Twilight upon reaching the Gerudo Desert. She explains that the mirror is their last link to enter the Twilight Realm and defeat Zant. However, once they reach the Mirror Chamber after having defeated Stallord in the Arbiter's Grounds, they find that the Mirror of Twilight and the Portal Stone are nowhere to be found. After riding atop the statue and using the Spinner at the apex of the large structure, the statue itself dips into the sand, raising not only the black stone, but the Mirror of Twilight itself. Midna, however, realizes that only one fourth of the Mirror is intact, and it is at this point that the Sages make their appearance and explain that Zant has fragmented the mirror with the help of Ganondorf's "mighty magic", not having been able to completely shatter it due to him being the false king of the Twilight Realm.[16]

Learning that the mirror has been broken in pieces, the pair is unable to enter the Twilight Realm, but the Sages inform them of the location of the remaining three mirror shards: Snowpeak, Sacred Grove, and the City in the Sky.[17]

Once Link and Midna succeed in finding the three missing Mirror Shards, they place them in the Mirror of Twilight and transport themselves to the Twilight Realm, where they ultimately defeat Zant, the Usurper King. After defeating Ganondorf, Link, Midna and Princess Zelda gather around the Mirror Chamber to bid farewell to the Twilight Princess as she returns to her realm. Midna mentions that as long as the mirror is around, they could always meet again, saying that it was the goddess's "design" that they should meet.[18] However, just as she is about to depart, she sheds a tear and uses it to completely shatter the Mirror of Twilight, thus destroying the only known connection between Hyrule and the Twilight Realm.[19]