This article is about the recurring item. For other uses, see Mirror (Disambiguation). 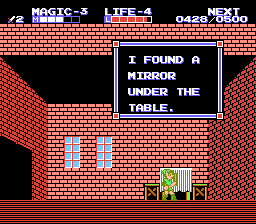 Link finding the Mirror in a house

Given back to a woman in Saria Town to learn the Life magic
Mirrors are recurring Items in The Legend of Zelda series.[name reference needed]

The Mirror belongs to a woman who lives in the Water Town of Saria, who had lost the item somewhere in town.[1] The Mirror can be found inside the first house of the town's second area, beneath a table.[2] The woman rewards Link for finding it by inviting him inside her house,[3] where Link meets an Old Man who teaches him the Life magic. 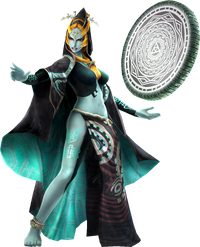 Twili Midna tosses her Mirror into the air as it summons a Zant's Hand. While mimicking Midna, they both start winding a powerful punch. Midna then punches forward, making the Zant's Hand strike powerfully at her enemies. Against Giant Bosses, Midna shines a strong light beneath the Boss before levitating up into the air, then sends a Zant's Hand crashing down as it punches the Boss's weak spot.

Midna summons a spear while in her full Fused Shadow form. She then leaps into the air, twirls and then lands, stabbing the ground and creating an enormous explosion of Twilight energy that blows enemies back. This attack damages a wide, circular range ahead of Twili Midna and carries her slightly forward with it.

Upon activation, like her imp form, Midna simply snaps her fingers as a Zant's Hand mimics the action behind her. When deactivating the Focus Spirit, Twili Midna chants a spell as a tear falls from her eye and floats forward, which she then pushes at her enemies and causes reality to shatter as though it were a mirror. When her Focus Spirit depletes, Twili Midna prepares an attack in her hands as she charges dark energy. She then unleashes the attack by spreading her hands out, exploding in a burst of Darkness energy.

Mirrors in The Legend of Zelda series
Community content is available under GNU Free Documentation License unless otherwise noted.
Advertisement