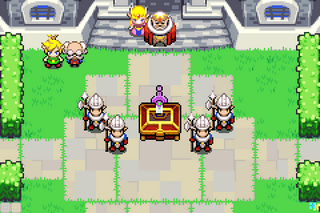 Vassals protecting the Picori Blade and the Bound Chest

The Hero of Men uses the Picori Blade and the Light Force to lock the beasts away within the Bound Chest.
The Minish Legend is the series of events taking place after Skyward Sword and before The Minish Cap.[1]

Long ago, during the early development of Hyrule, the kingdom was at peace after an age of chaos. One day, the land was suddenly overwhelmed by evil creatures that descended upon it in swarms, driving the world into shadows and nearly bringing the kingdom to ruin. As Hyrule neared the brink of collapse, the tiny Minish appeared from the sky and gave the Hero of Men the Picori Blade and the magical Light Force. Using these two special gifts, the Hero drove the beasts back and restored light to the land of Hyrule.[2][3]

To ensure the beasts could not bring further destruction to the land, the Hero of Men sealed them all within the Bound Chest. Sealing the chest with the Picori Blade itself, the Hero of Men was able to bring the destructive war to an end and brought peace to the kingdom. Meanwhile, the Light Force was secretly sealed within the body of Hyrule's Princess to prevent its misuse, giving her and her successors magical powers that would continue across the generations.[4]

The history of the war was documented in a series of stained-glass windows within the Elemental Sanctuary that acts as a bridge between Hyrule and the Minish Realm.

In honor of their service to Hyrule in the war, the Royal Family of Hyrule established the Picori Festival, an annual celebration to honor the Minish.[5] Storytellers recounted the stories of the war and the legend of the Hero of Men, and the kingdom held a sword-fighting tournament, the winner of which would receive a Smith's Sword and have the ultimate honor of approaching and touching the Picori Blade itself.[6] It also became common knowledge in the stories of the Minish that the Minish Door, the gateway to the Minish Realm, would open temporarily once a century to allow travel between the two worlds and allowing the Minish to either come to Hyrule or return to their homeland.[7]

Wars in The Legend of Zelda series
Community content is available under GNU Free Documentation License unless otherwise noted.
Advertisement