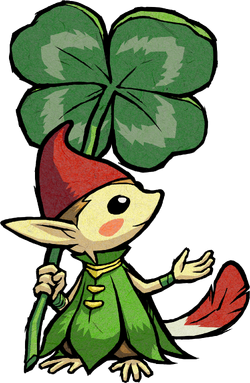 The Minish,[2] also known as Picori by the Hylians,[2] are a small race of people no bigger than Link's thumb that appear in The Minish Cap. Ezlo and Vaati were once Minish too.

The Minish resemble anthropomorphic mice that, like Hylians, have long, pointed ears. They came from the Minish Realm long ago, when monsters threatened mankind, and gave the Hero of Men a Sword of unparalleled power: the Picori Blade. They also left behind the Light Force or Golden Light for the Royal Family. Their help is celebrated annually in Hyrule through the Picori Festival. Every one hundred years, the Minish Door, a doorway between their world and the world of men, appears in the courtyard of Hyrule Castle.

It is said that Minish are invisible to adults; only good, well-behaved children can see them.[3] The Minish are well-known for their Kinstone hiding capabilities. Wanting their human counterparts to find them, they place them in various obvious and inconspicuous places, and even keep some for themselves to Fuse Kinstones with Link when he comes along.

Their language is slightly different from that of the Minish Realm and they do not understand the Hylian language.[2]

The Forest Picori are the Minish that live in the Minish Woods, and throughout Hyrule Field.

The Mountain Minish are seven Minish that followed Melari from the Minish Woods to Mount Crenel.

The Town Minish are the Minish that moved from the Minish Village to Hyrule Town due to their love for Humans.