Zelda Wiki
Register
Don't have an account?
Sign In
Advertisement
in: Enemies, Common Enemies and Traps, Blins,
and 7 more
English 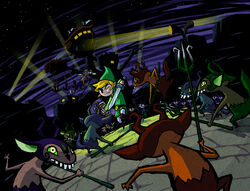 In The Wind Waker, Miniblins tend to appear seemingly out of nowhere, only appearing wherever the third-person camera is not focused (this is seen most often in the Savage Labyrinth), and swarm the area in large numbers. They use small tridents or pitchforks as weapons, which they use to stab their opponents with. Miniblins make a characteristic "Nyeh Na!" and "Deh Dank!" sound, which can alert Link of their presence. If Link is attacked by one, it laughs at him.

Miniblins are rather weak on their own and can be easily defeated with just the Hero's Sword. What they lack in strength they make up for by surrounding Link in large groups and attacking quickly.[3] Miniblins will actively follow Link, and can also climb after him up ladders and walls. If Link finds himself facing a Miniblin swarm without his Sword, he can drop All-Purpose Bait to distract them and make his escape. They are also vulnerable to the Skull Hammer. The Skull Hammer can be used to evoke humorous cries from them; smashing the ground will send nearby Miniblins sky high, and swinging it sideways will send them flying into nearby walls. Strangely, if Link distances himself from them, Miniblins will attempt to locate the nearest supply of water and kill themselves by jumping into it.

Miniblins also appear in Phantom Hourglass. In this game, they are less colorful, and their trademark call is replaced by a vaguely monkey-like screech. They also show slightly greater intelligence, as evidenced by their use of rudimentary strategy in battle; instead of charging head-on, a lone Miniblin will draw back and wait for its comrades to surround Link before attacking.

Mounted Miniblins appear in Spirit Tracks. They are first encountered atop Armos during the young hero's second visit to the Tower of Spirits. At first, those Miniblins seems invulnerable to attacks as neither the Phantom nor Link alone can cause damage and getting too close to strike it will cause the Armos to produce harmful spikes from its base. The mounted Miniblin can be defeated by using the Whirlwind on it from an elevated position, or from Phantom Zelda, then attacking it with the sword. The Armos it rides on will self-destruct in an explosion.

Led by a Big Blin, pirate Miniblins inhabit the Pirate Hideout where they keep their prisoners in cells. These pirates look exactly like regular Miniblins unlike Phantom Hourglass. When Link has a passenger with him, pirate Miniblins, traveling by ship or Tank, attack the Spirit Train in order to capture the passenger and bring him to their hideout. In the Pirate Hideout, Miniblins try to capture Link by throwing cages at him if he tries to rescue their prisoner. If Link is not trying to rescue the prisoner, the Miniblins can be found dining at tables, and cannot be attacked.

In Hyrule Warriors Legends, Miniblins appear as enemy grunts as part of the Era of the Sea in the Forsaken Fortress and the Wind and Earth Temples stages. Like the other armies of Bulblins and Stalchildren, there are Miniblin Captains which are taller and more armored. For Miniblin artillery, they wield throwing axes.