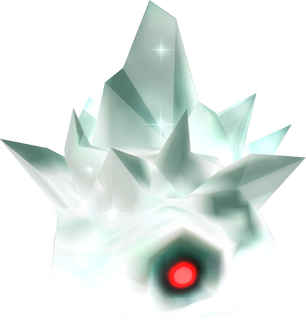 Ball and Chain
Sword
Boomerang
Fire Gloves
Mini Freezards are recurring Enemies in The Legend of Zelda series. They are the miniature version of Freezards; sometimes even the shattered remains of one. Mini Freezards appear as small chunks of ice commonly found on smooth, icy floors. When struck with the Sword, they quickly slide across the ice and ricochet off the walls or other obstacles, which can be difficult to avoid. As ice-based enemies, they are highly susceptible to fire-based attacks and blunt force.

Link's Sword can be used to defeat Mini Freezards, but it takes about three hits, and each slash will send them flying across the floor and bouncing off walls, potentially right back into Link. The Ball and Chain is the best and most effective way to kill these enemies, though using Arrows is also effective.

In Tri Force Heroes, Mini Freezards appear in the Ice Cavern Area of the Drablands. Their appearance is slightly different, as instead of a single red eye, they have three holes forming two eyes and a mouth. They behave the same as in previous games, as when struck, they will slide around and bounce off of walls and icicles. Most Mini Freezards are found sitting still, but others may already be sliding across the floor as a kind of obstacle. They take three hits with the Sword to defeat, but can be killed instantly with the Fire Gloves.