Zelda Wiki
Register
Don't have an account?
Sign In
Advertisement
in: Enemies, Common Enemies and Traps, Enemies in A Link to the Past,
and 6 more 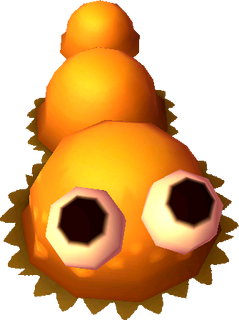 Sword
Mini-Moldorms are recurring Enemies in The Legend of Zelda series.[1][note 1]

In Oracle of Seasons, there is a Mini-Moldorm hidden on an island off the Western Coast. The sign there says that the Black Beast rests there.[3] If Link uses a Mystery Seed on the object buried there, it brings the Mini-Moldorm back to life. After defeating it, Link obtains the X-Shaped Jewel. Other instances where Mini-Moldorms appear are in Poison Moth's Lair, Unicorn's Cave, Explorer's Crypt, Sword & Shield Maze, Temple Remains, and Hero's Cave.