This article is about the location in Hyrule Warriors. For similar locations, see Mine (Disambiguation). 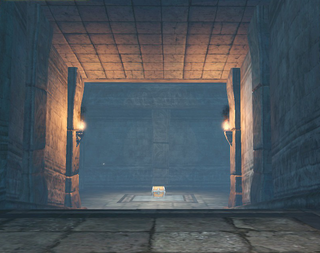 The Mine is a location in Hyrule Warriors.[1]

The Mine is located in the northwest corner of Hyrule Field. In "The Armies of Ruin" Scenario, the Mine Entrance must be accessed to retrieve the Bombs, which are needed to destroy the Boulders blocking the way to Zelda and the rest of Hyrule Field.[2] Around the Mine Entrance is a Goron Captain and a Lizalfos fighting with each other, with the Goron Captain in trouble.[3] Helping the Goron Captain by defeating the Lizalfos will open the Mine Entrance allowing access to the Mine, in turn allowing the Warrior to retrieve the Bombs.[4][5] If the Bombs have already been obtained, then a Weapon Bag will instead be found in the Treasure Chest. After the Bombs have been retrieved, a group of Bokoblins will drop Boulders in front of the Mine, blocking the entrance. The Warrior must used the newly acquired Bombs to destroy the Boulders and escape the Mine.[2] In Adventure Mode, the Mine Entrance is closed and cannot be opened.