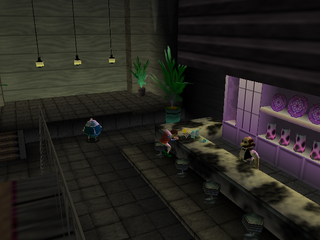 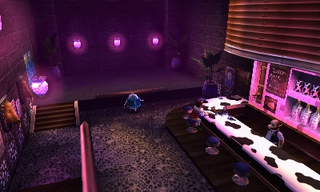 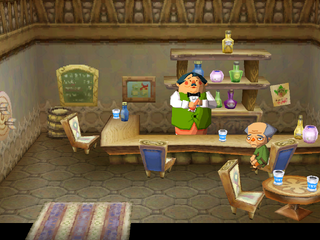 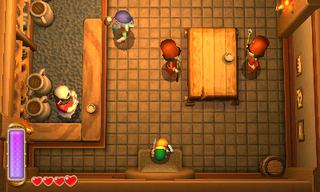 The Milk Bar,[1][name reference needed] also known as Latte,(MM)[2] is a recurring location in The Legend of Zelda series. It is a drink restaurant that primarily serves Milk.

In Majora's Mask, the Milk Bar is referred to both as the Milk Bar and as Latte.[3] The bar, which is located in East Clock Town, is run by Mr. Barten,[4] and is open from 10 PM to dawn.[5] The bar has a reputation for being a great live venue, so the Zora band, The Indigo-Go's, had planned to do their Carnival of Time performance on the Milk Bar stage.[6] However it was cancelled when Lulu, the band's singer, lost her voice.

The Milk Bar is a members-only establishment, and as such, it refuses entry and service to anyone during opening hours who does not have proof of membership in the form of Romani's Mask.[7][8] There are two drinks offered at the Milk Bar: regular Milk, which costs 20 Rupees, and the special vintage Milk Chateau Romani, at a price of 200 Rupees per serving.[9] Link cannot order anything unless he is wearing Romani's Mask when speaking to the bartender.[10]

By speaking to The Indigo-Go's manager, Toto, near the stage, Link can participate in a sound check for the band.[11] Link is required to play the "Ballad of the Wind Fish" by donning each transformation mask and playing their specific part in the song as orchestrated by the manager. By doing so, Link can receive the Troupe Leader's Mask from Gorman, who happens to be listening to the performance.[12]

Link can also find Madame Aroma drinking in the bar from 6:00 PM on the Night of the Final Day. If Link received the Special Delivery to Mama during the Reuniting Kafei and Anju sidequest, he can give it to her to receive a Bottle full of Chateau Romani.[13] In Majora's Mask 3D, Link is unable to enter unless he has Romani's Mask, preventing him from delivering the letter until he has assisted Cremia in delivering Milk.

During the ending credits, the members of the Gorman Troupe and The Indigo-Go's can be seen performing at the Milk Bar as part of the performances for the Carnival of Time.

In Phantom Hourglass, a small Milk Bar can be located on Mercay Island, though nothing can be purchased from it; however, Link can receive a Power Gem from the bartender. It is said that Linebeck usually stops at it.[14]

In A Link Between Worlds, a Milk Bar can be found in both Kakariko Village and Thieves' Town. The Milk Bar Owner from Hyrule sells Milk for 20 Rupees a Bottle, and later for 10 Rupees after saving his regular customer, the Bouldering Guy, with a Bottle of Premium Milk. A duo of musicians, comprising of a Bard and a Flute Boy, play a song for 10 Rupees. These songs are selected at random each time, and are a guitar and flute remixes of recurring songs from The Legend of Zelda series.

In Lorule, the Milk Bar Owner simply desires to be left alone to drink Milk in peace and does not sell Milk to Link.[15]