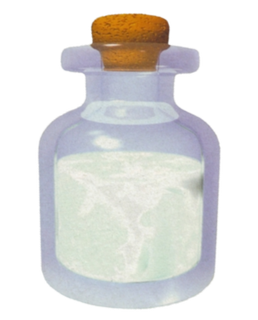 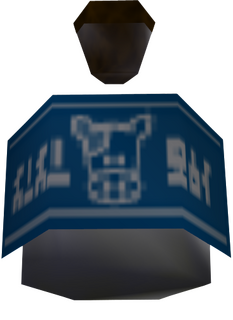 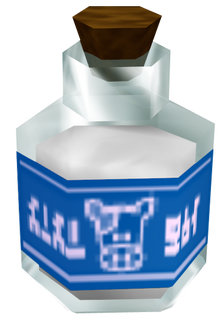 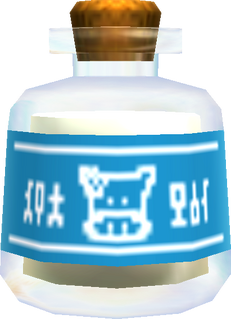 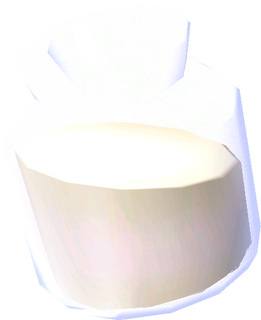 Restoring health
Milk,(OoT | MM | TP | ALBW)[1][2] also known as Lon Lon Milk,(OoT | TMC)[3][1] Milk Bottles,(MM)[4] Ordon Goat Milk,(TP)[1] and Milk in a Bottle(TP)[5] is a recurring Item in The Legend of Zelda series. It can be stored in Empty Bottles and usually has two helpings. Each helping recovers up to five Hearts, with the exception of Twilight Princess where it only recovers three.

Milk can be obtained directly from the Cows found inside Secret Grottoes or in Lon Lon Ranch in Ocarina of Time. After playing "Epona's Song" to a Cow, it will reward Link with free Milk.[6] As a child, Link can also buy Milk from Talon for 30 Rupees.[7]

In Majora's Mask, Link can also get free Milk from Cows, although it can also be purchased from the Milk Bar for 20 Rupees. Link can also buy a special type of Milk called Chateau Romani for 200 Rupees, which grants him unlimited Magic Power for all three days. Apparently, Chateau Romani has an inebriating effect, as evidenced by Gorman, who overindulges after finding out his troupe's show is cancelled.[8] This may be one of the reasons it is considered a drink for adults.[9]

Link must protect several containers of Milk during a sidequest involving Cremia. When her path to Clock Town is blocked, forcing her to drive through the Gorman Track, Link can use his Hero's Bow or the Troupe Leader's Mask to ward off two masked bandits who attack her cargo. If Link manages to save enough Milk containers, he will be rewarded with Romani's Mask.

In Majora's Mask 3D, Link can obtain the Mystery Milk from the Gorman Brother to deliver to Gorman. Link cannot drink it, and it must be delivered in a certain amount of time or it will turn into Moldy Milk. Link must go back in time to dispose the Moldy Milk.

In The Minish Cap, Malon goes to Hyrule Town to sell Lon Lon Milk for 100 Rupees after Link finds the Spare Key to Talon's house. The Milk containers are carried on Epona.

In Twilight Princess, Ordon Goat Milk can be purchased in Sera's Sundries for 10 Rupees and in the Goron Shop for 20 Rupees. Link obtains his first Bottle of Ordon Goat Milk from Sera after helping her, although it is only half-full. This Ordon Goat Milk is also used to make Ordon Goat Cheese.

Milk is sold in the Milk Bar in Kakariko Village for 20 Rupees in A Link Between Worlds. However, after the completion of the Premium Milk side quest, the price is cut in half. Different from previous games, it only contains one helping.

In Breath of the Wild, Milk is referred to as Fresh Milk. It is sold in the East Wind general store in Hateno Village for 12 Rupees, with a stock of three available for purchase. It can also be purchased for 12 Rupees from two traveling merchants, a stock of two are sold by Agus at Dueling Peaks Stable, and a stock of 10 during Rainy Day Specials by Yammo who travels between Tabantha Bridge Stable and Snowfield Stable.

In Ripened Tingle's Balloon Trip of Love, Tingle and friends come across Usotami Village in search of Kakashi, who was captured by Segāre. Once there, they will meet Liar. After a proper meeting, she gives Tingle a list of characteristics of a specific goat-like animal he need to find from a herd. When selected, Liar will milk the animal, finally giving Tingle the Milk. The Milk is used in Big Liar's chamber, where Tingle offers the Milk to calm the monster.

Young Link drinks Milk as his taunt in Super Smash Bros. Melee. It also appears as a Trophy.

Young Link drinks Milk as his Taunt in Super Smash Bros. Brawl. It also appears as a Sticker.

In Hyrule Warriors Legends, Milk appears as one of the Drink Fairy Food items, used in the My Fairy Dining Room to level up Fairy Companions. It is associated with the element of Light.