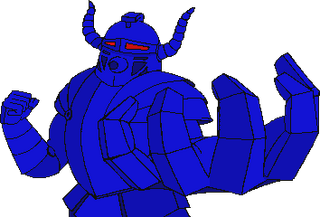 Militron (pronounced /ˈmɪlɪtɹɒn/ MI-li-tron)[1] is the third boss in The Faces of Evil. He is located in the Militron Stage, and is encountered again at Ganon's Lair.

Militron is an armored knight who is a minion of Ganon. He is first encountered at his Face of Evil, the Militron area. He possesses the ability to turn Koridians into stone soldiers by crushing them in his hand and exposing them to fire, which he then sends to attack Link.[2] When Link defeats Militron, his armor explodes, revealing himself to be nothing more than a fat old man. He then makes his escape, mortified by his exposure.[3]

He is encountered again in Ganon's Lair, and is fought the same way.