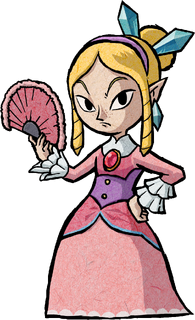 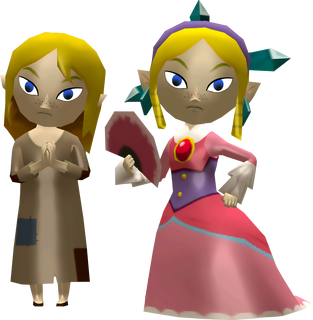 Mila is a character in The Wind Waker.[2]

Mila is a wealthy girl from Windfall Island who was kidnapped by the Helmaroc King and taken to the Forsaken Fortress.[3] During Link's second trip to the Forsaken Fortress, Tetra and her crew of pirates take Mila and Maggie back to Windfall Island. When Mila returns, she learns that her father spent their riches paying Tetra in hopes of bringing her back to the island safely.[4] Being saddened and angered by her new life of poverty, Mila assumes work at Zunari's Shop to try and make money for the family.[5][1] However, she becomes impatient and sneaks out at night to steal the money out of Zunari's private safe.[6] Link must follow her and intervene as she attempts to open Zunari's safe, catching her in the act and forcing her to give up her life of crime.[7] Afterwards, instead of thieving, she tells Link that she spends her evenings working at an unspecified island, indicating that she is no longer present on Windfall Island at night.[8]

Prior to her life of squalor, Mila had a very bossy and overbearing disposition,[1] but later becomes more humble and polite after accepting her new lifestyle.[9]

Thieves in The Legend of Zelda series
Community content is available under GNU Free Documentation License unless otherwise noted.
Advertisement