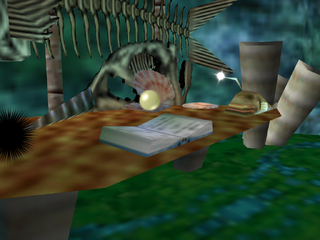 Learn riffs for the Jam Session
Mikau's Diary is an object in Majora's Mask.[name reference needed]

Mikau's Diary is found in the room he shares with Tijo in the Zora Hall. Link can reach it by using the Hookshot. Because it is written in Zoran Script, Link can only read it while in his Zora form.[1]

The Diary contains several entries. In the first, Mikau records the first four notes he plays while having a Jam Session with Japas.[2] In the next entry, he writes that he had Lulu listen to their session,[3] and in the third entry, he writes the four notes he played at another session.[4] In the last entry, Mikau wrote that Evan had asked to speak with him about Lulu, and that his lucky color for the week was green.[5] Upon discovering Lulu's condition, Mikau attempts to confront the Gerudo Pirates and recover her eggs, which ultimately leads to his death. The full contents of Mikau's Diary are as follows:

While in Zora form, Link can use the two riffs Mikau wrote to initiate a Jam Session with Japas, and play the full song they subsequently create for Evan, who will reward him with a Piece of Heart.