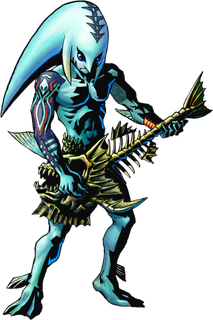 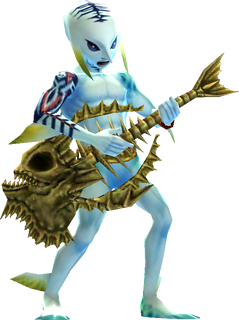 Mikau is a character in Majora's Mask.[1]

Mikau is the lead guitarist of the Zora band The Indigo-Go's and is also a Zoran hero.[2] He and Japas often compose songs of their own, much to Evan's chagrin.[3][4] He also has a close relationship with the band's lead singer, Lulu.[5]

After Mikau finds out that Lulu's Eggs were stolen by the Gerudo Pirates, Evan charges him with the task of retrieving the Eggs, in the hopes that doing so would recover Lulu's voice in time for their upcoming performance at the Carnival of Time.[6] Before heading to the Pirates' Fortress, Evan tells him where to obtain empty Bottles to store the Zora Eggs. And so Mikau goes to the Waterfall Rapids to race the Beaver Bros..[7][8]

Mikau then proceeds to infiltrate the Pirates' Fortress, but does not succeed in retrieving any of the Eggs and ends up floating in the Great Bay Coast, mortally wounded from the injuries he received. Link then rescues him and drags him to shore, where he plays a final song in which he pleads that Link assist Lulu in getting her voice back.[9] After playing the "Song of Healing" for Mikau, he dies and his soul is trapped within the Zora Mask. Wearing it allows Link to assume the form of Mikau. His spirit appears briefly thereafter to sing Link his farewell songs: "We the Zora" and the "Zora Fight Song."[10][11][12]

Mikau's Zora Guitar is placed right next to the entrance to Great Bay Coast, serving as the resting place of the young guitarist.[13]