Zelda Wiki
Register
Don't have an account?
Sign In
Advertisement
in: Locations in The Adventure of Link, Harbors, Towns, Locations
English 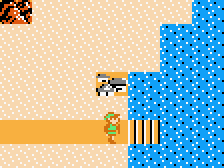 Mido Town,[1] also known as the Harbor Town of Mido,[2] is a location in The Adventure of Link.

The town is located in a desert just north of the King's Tomb, and near the Port which is the gateway to Eastern Hyrule. The Hammer must be obtained in order to clear the rocks that obstruct the path to the town of Mido, otherwise Link must travel the long path through Death Mountain to get there.

Inside Mido's church lives an Hylian Knight who teaches Link the Downward Thrust move. However, the main door is locked from the inside, so Link uses the Jump Spell to reach the church tower and enters through its open door. The swordsman at the end of the basement passes on Link's new skill upon talking to him.[3]

An Old Woman also approaches Link and asks for his help in saving her sick daughter.[4] The Water of Life, which is needed to recuperate the health of the mother's child, is found in a cave in Moruge Swamp blocked by a boulder. After returning the medicine to the old woman, she rewards Link by allowing him inside her house and letting the young hero meet an Old Man,[5] who teaches him the Fairy magic in return.[6]

Mido Town is named after Mido from Ocarina of Time.[note 1] It is the only town not to be named after a sage.[8]