Not to be confused with Mido Town, a location in The Adventure of Link. 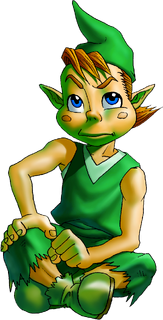 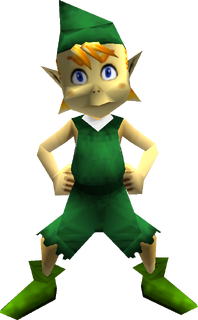 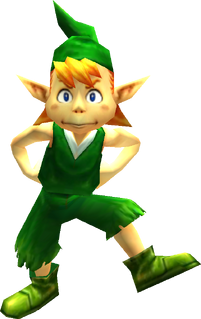 Leader of the Kokiri

Mido is a character in Ocarina of Time.[1] He is the moody leader of the Kokiri.[2]

Mido has a reputation of being mean to others and bossing them around, but he respects the Great Deku Tree and craves to be liked by Saria.[3] This might be either source or fuel for his condescending attitude towards Link who is both favoured by the Great Deku Tree and best friend to Saria. Mido's prime target is Link's "not quite Kokiri-ness," such as that for a long time Link didn't have a Fairy partner, resulting in Mido calling him "Mr. No Fairy."[4]

Despite this, Mido is not a bad person. His jealousy of Link does not stop him from giving advice to him,[5] and in the future years, he seems to be genuinely sorry for the way he treated Link despite the fact that he is unaware of Link's identity as an adult.[6] He can be depended on, even in the face of danger, and at least holds the trust and loyalty of Fado.

Mido guarded the road to the Great Deku Tree and refused to let Link pass if he didn't have a Sword and a Shield.[7] Additionally, he was not at all thrilled the Great Deku Tree had summoned Link instead of him, something he made sure to have Link know.[8] When Link returned with the required equipment, Mido was greatly displeased and reiterated that he would never accept Link as an equal.[9]

Unfortunately, Link's visit to the Great Deku Tree ended with the latter's death as a result of the curse laid on him by Ganondorf. When Mido found out the father of the Kokiri had passed away, he immediately lay the blame on Link further motivating him to leave the Kokiri Forest.[10]

In the seven years that Link was gone, life in the Kokiri Forest became tough as Ganondorf's evil spread from the Forest Temple and caused the Kokiri's home to be infested with monsters.[11] Mido went with Saria to put a stop to it and on her request guarded the route to the Sacred Forest Meadow so that no one could follow her.[12] When Link met him in the Lost Woods, Mido did not recognize him although he noticed there was something familiar about him.

As such, he did not let him through either until the stranger played him Saria's Song and thereby proved he was friends with Saria.[13] When Link came back after helping Saria awaken as the Sage of Forest to tell Mido that she would not come back, Mido became upset and asked the stranger that if he'd ever meet Link, he would tell him that Saria had been waiting for him and that he was sorry for having been mean to him.[14]

At the liberation celebration at Lon Lon Ranch, Mido sat at a distance from the festivities and next to King Zora with both leaders worried about what had happened to their loved ones. Mido was pulled out of his thoughts by small sparks coming down causing him and King Zora to look up to see green and blue orbs of light, followed by three others, speeding across the sky.