"Cia made a critical error when she opened a portal to the Era of Twilight. While a swarm of monsters joined her cause, the most powerful and vicious of Twili joined the Hero's. Midna, the Twilight Princess, ruled over the Twili people with grace and beauty...until a curse changed her into the wolf-riding imp that warriors see on the battlefield. She draws strength from the Twilight Realm, able to channel it through her versatile hair. She wears a mask called the Fused Shadow and can even assemble its full might for a single mighty blow."
— Midna, Twilight Princess Historical Entry Tutorial Bio

During the War Across the Ages, Cia uses the power of the Triforce to warp time and space, opening a Gate of Souls in the Era of Twilight. Using her power, she curses Midna, transforming her back into an imp, though Midna is initially unaware that it is Cia's doing. Cia joins forces with Zant and has him guard the Gate of Souls. Midna, aided by her army of monsters, hunts Cia down to Twilight Field.

Having joined forces with Cia, Zant covers Hyrule in a veil of Twilight once again. Midna takes advantage of this, using the patches of Twilight to increase her power. While searching for Cia, she comes across a Goddess Butterfly belonging to Lana, Agitha, and the Hyrulean Forces. When Agitha explains that it is capable of leading one to any object they seek, Midna orders the butterfly to lead her to Cia. Determined to force Cia to change her back from her imp form, Midna ignores Lana's attempts to reason with her. When Cia escapes, she blames Lana and the Hyrulean Forces for interfering, leading to a duel between her and Lana atop the Bridge of Eldin. Midna is defeated; however, Lana reveals that they are also trying to stop Cia. Realizing they share a common enemy, Midna returns the Goddess Butterfly and joins forces with them.

The butterfly eventually leads them to the Palace of Twilight, where they find Zant defending the Gate of Souls. They are soon confronted by Argorok, who they manage to weaken with Magic Circles and some assistance from the Great Fairy. After defeating Argorok and Zant, Lana closes the Gate of Souls, only for her and Midna to be confronted by Cia. In retaliation for both cursing and mocking her, Midna uses her hair to strike Cia, knocking off her mask in the process. Midna is shocked by how much Cia resembles Lana, who is forced to reveal that she and Cia were originally part of the same being. Midna, Lana, and Agitha leave the Palace of Twilight, following Lana back to her Era in order to defeat Cia. Midna convinces Lana to tell their allies the truth of her connection with Cia, and reveals that Ganondorf is the one responsible for Cia's corruption.

Together with her new allies, Midna follows them to the Temple of the Sacred Sword to help Link in retrieving the Master Sword. Using her power, she awakens the Sealed Statue of Twilight, allowing them to access the temple and helping Link to eventually retrieve the sword.

After acquiring the Master Sword, the Allied Hyrulean Forces confront Cia and the Dark Forces at the Temple of Souls. When Link is cornered by several Dark Links, Midna joins forces with Darunia to defend Link; they are joined by Impa, Sheik, and Fi, allowing Link to realize his limitations and awaken the true power of the Master Sword. Cia retreats as the partially revived Ganondorf appears to reclaim the Triforce of Power from her, though he turns his attentions to defeating Zelda. Before retreating, Cia summons several powerful monsters, forcing the Hyrulean Forces to retreat. While Link stays to protect Zelda, Midna uses her abilities to evacuate the rest of the Hyrulean Forces. Link manages to defeat Ganondorf, who retreats to prevent himself from being destroyed by the Master Sword.

Linkle's Tale: Her True Self

As the Allied Hyrulean Forces are preparing for the final battle with the Dark Forces, Zelda senses a dark magic that threatens to consume all of Hyrule. Determined to stop it herself, Zelda leaves with a small group of soldiers, as the others are busy preparing for the battle with Cia. Midna notices Zelda's absence and follows Zelda to the Palace of Twilight. On the way, she encounters a girl named Linkle, who is mesmerized by a mysterious crystal she found. Midna too becomes transfixed by the crystal, and when she touches it, she is changed back to her true form. Joined by Linkle, Twili Midna continues her quest to aid Princess Zelda. They discover that the dark magic threatening Hyrule is out-of-control dark Twilight magic, which has produced shadowy doppelgängers of Twili Midna and Zant, Dark Twili Midna and Dark Zant. After rescuing Zelda and defeating the dark Twilight manifestations, Midna is forced to smash the mysterious crystal that had restored her true form, in order to produce enough energy to halt the flow of dark magic. This reverts her to her imp form, as it was the crystal's power that allowed her to overcome the curse and maintain her true form; however, Midna willingly chooses to sacrifice her true form in order to save Hyrule and her friends, leaving a profound impression on her new ally Linkle. Midna and Zelda return to prepare for the final battle with Cia.

Together with her allies, Midna joins in the final battle with Cia and her army. Cia is defeated and vanishes, leaving behind the Triforce of Power, which Lana obtains. Though Cia is defeated, Midna remains in her cursed form, and using a Gate of Souls created by Lana, returns to her own era together with Agitha.

Midna, along with the rest of their allies, is summoned by Lana during the battle with Ganondorf's Forces. She learns that Ganondorf had managed to obtain the complete Triforce after defeating Zelda and Link, with the aid of her generals: a revived Zant and the Demon Lord Ghirahim from the Era of Skyloft. Joining forces with her allies once more, they manage to defeat Zant and Ghirahim, gaining a well-needed victory for the demoralized Hyrulean Forces. Meanwhile, Ganondorf captures Hyrule Castle and transforms it into Ganon's Tower.

Together with the rest of the allied Hyrulean Forces, Midna participates in the final battle with Ganondorf. Eventually Ganondorf is killed and revived by the power of the Triforce, transforming him into the Dark Beast Ganon. Midna aids her allies by providing her power to the Light Arrows, leading to Ganon's defeat. Lana, Link, and Zelda reclaim their pieces of the Triforce and use it to reseal the Demon King. Midna and the others wave goodbye as they return to their original eras. 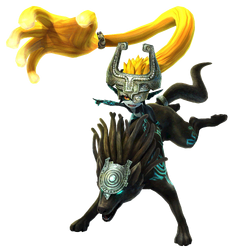 In her cursed imp form, Midna lacks most of the power of her true form and is forced to rely on the power of the Fused Shadow. Fortunately, she retains her ability to create Twilight Portals and Twilight magic, though on a reduced scale compared to her true form. Though it reduces most of her capabilities compared to her true form, her imp form does grant her the ability to manipulate her prehensile hair like an extra hand, allowing her to grab enemies. In addition to the Fused Shadow, Midna also uses cursed Shackles that originate as from the Twilight Realm as her main weapon and can imbue Midna with the power of darkness when she grabs an enemy with her hair. She is also able to summon her loyal Twilight Wolfos minions from Twilight Portals to use as riding mounts and to attack enemies in a manner similar to Wolf Link. She can also create an energy ball made of Twilight energy as her special attack. She can also use the Fused Shadow to transform into her Eldritch form to attack enemies with its spear as her Focus Spirit Attack.

Dark Midna is a shadowy doppelgänger of Midna's imp form that appears as an enemy in Adventure Mode. Unlike Dark Twili Midna, she has no role in the main story in either Hyrule Warriors or Hyrule Warriors Legends. Dark Midna uses the same moveset and drops the same Materials as Midna. She uses dark versions of Midna's Fused Shadow and Twilight Wolfos. 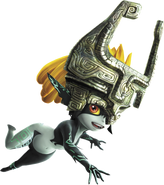 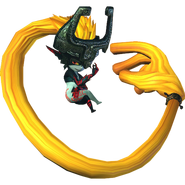 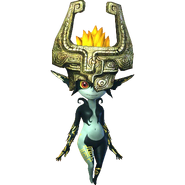 Midna in her Battle Intro cutscene

Midna's Makar recolor
Add a photo to this gallery

Retrieved from "https://zelda.fandom.com/wiki/Midna_(Hyrule_Warriors)?oldid=539974"
Community content is available under CC-BY-SA unless otherwise noted.