"You don't have to look so sad! We actually find it to be quite livable! I mean, is perpetual twilight really all that bad?"
— Midna

) is a character from The Legend of Zelda: Twilight Princess. Midna, a Twili, teams up with the protagonist, Link, to battle a "greater evil" that she alone cannot overcome. In fitting with her dark nature, she has a playfully mischievous sense of humor and shows a somewhat cynical demeanor during most of the game. She also has the most extensive voice acting of any character in the series, as all of her dialogue is represented by audible (though unintelligible) vocalization. Most of her magical abilities feature her hair taking on the shape of an arm, or having some other relation. Midna's voice is provided by Akiko Koumoto.

Midna, like all creatures from the Twilight Realm, cannot tolerate light and hides in Link's shadow when he is in the Light World. The only time she takes her physical form is when Link is in the Twilight, is a wolf, or is in a dungeon. It may also simply be that she cannot fraternize with the light-dwellers; this would seem to fit with Zant's claim that Midna is incapable of consorting with light-dwellers. However, when Zelda restores Midna, she also gives Midna the ability to withstand the light, though Midna still chooses to remain in Link's shadow for most of the time.

The way Midna talks is notable. Most of her sounds are random words, but some fans believe her voice is Japanese backwards; however, this is unknown. Additionally, Midna is the only character in Twilight Princess to have blue text when she speaks.

When asked if Midna would return for a future game or not in an interview with Game Informer, Eiji Aonuma stated: "Because of the way Twilight Princess ended, I don’t see her making a reappearance, but who knows? If we hear enough voices for her to come back, how can we not?"

"Do you now understand what I am? I'm a descendant of the tribe that was banished to the Twilight Realm!"
— Midna 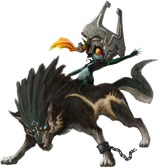 Midna is one of the Twili, a race descended from wielders of powerful and evil magic who were banished to an alternate dimension by the goddesses Din, Farore, and Nayru. This alternate dimension, out of which the sublimated descendants could only exist as shadows, eventually became known as the Twilight Realm. In recent time, the Twili have been converted to fearsome Shadow Beasts (and Midna into an imp-like form) by the self-styled Twilight king, Zant.

Midna first meets Link after King Bulblin and his minions kidnap Colin and Ilia. When Link gives chase, he crosses into the twilight, transforming him into a wolf. He awakens trapped in a jail cell beneath Hyrule Castle; Midna helps him escape through the Underground Waterway and return to Hyrule. Midna makes it clear that she is helping Link only to save her own world and has no concern for the Realm of Light. She informs Link that they should recover the parts of a powerful magical artifact known as the Fused Shadows. After gathering the third Fused Shadow, Zant appears and exposes Midna to the light of the spirit Lanayru, almost killing her. He then puts a curse on Link to trap him in his Wolf Form and takes the three Fused Shadows away from them (strangely, he allows Midna to keep the one that she wears on her head). Lanayru transports the cursed Wolf Link and injured Midna back to Hyrule Field. Wolf Link takes Midna to Princess Zelda, hoping that she can remove the curse on him and heal Midna. She tells Link to find the Master Sword in the Sacred Grove to break the curse on him; less could be said for Midna. As Midna is nearing death, Zelda decides to sacrifice her own life to save Midna, though Midna tries to stop her. With Zelda gone and Midna restored, Link and Midna set off to find the Master Sword. Beginning from here, Midna's attitude changes.

Midna tells Link that, in order to destroy Zant, they must find the Mirror of Twilight to access the Twilight Realm again. When the two find it in the Mirror Chamber of Gerudo Desert, they see that it has been shattered into four shards; one of which still remains on the Mirror's pedestal. The Ancient Sages of Hyrule appear and explain that it was Zant who broke the Mirror; but this happened only because the sages had previously sealed Ganondorf in the Twilight Realm, who inevitably gave Zant his power. Midna later reveals that Zant could only shatter the Mirror; only the true ruler of the Twili could completely destroy it. After going through the Snowpeak Ruins, the Temple of Time, and the floating City in the Sky, the pair travel to the Mirror Chamber to restore the Mirror of Twilight. At this point, the Sages reveal that Midna is the Twilight Princess, leader of the Twili. She later reveals her intentions with Link and says that she did not care about what happens to the Realm of Light; all about which she cared was to save her own realm, but after seeing the selfless acts and sacrifices of both Link and Princess Zelda, she felt in the bottom of her heart that she had to save Hyrule, too. Thus, Link and Midna agree to save both Hyrule and the Twilight Realm. However, she also tells the Sages, when they ask for her forgiveness for their carelessness, that she was hardly qualified to forgive them as it was thanks to them that she was forced to flee from her people.

When Link and Midna confront Zant in the Palace of Twilight, a long battle ensues spanning tactics and arenas from past bosses and sub-bosses of the game. After the fight, Midna retrieves the Fused Shadows from Zant but does not return to her original form as she had hoped. Zant then reveals to her that only by killing Ganondorf can the curse truly be lifted and Zant truly be destroyed; that was the purpose of the barrier erected outside Hyrule Castle — it would allow a safe place for Ganondorf to hide so that Zant could stay alive. In a fit of rage, Midna uses the Fused Shadows to impale Zant with several locks of hair, killing him. After returning back to the Light World and Hyrule Castle, she regains the magic of her inheritance and becomes able to use the Fused Shadows to transform herself into a gigantic, dark, arachnid-like creature and shatters the barrier surrounding Hyrule Castle. Link and Midna then confront Ganondorf and, after Link battles both Zelda (who is being used by Ganondorf) and Ganon himself in beast form, Midna teleports Link and Zelda out the castle and faces Ganondorf alone.

After transporting Link and Zelda to safety, Midna once again transforms into the spider-like creature and engages Ganondorf in battle, with the castle being destroyed in the process. However, it is soon revealed that Ganondorf was victorious; he emerges from the castle carrying Midna's helmet before crushing it in his hand. Thus, Midna was seemingly killed. After Link, with some assistance from Zelda, defeats Ganondorf once and for all, it turns out that either Midna had survived the encounter or the Light Spirits had brought her back to life; and Ganondorf's spell on her was, at last, broken, allowing Midna to regain her true form. In a comical moment when Link first sees her true form, she is amused by his silence and asks, "Am I so beautiful that you've no words left?" Link is speechless. She then takes leave of the Light Realm, saying goodbye and thanking Zelda. Turning to Link, she begins a sentence: "I..." before breaking off and saying, "See you later..." (which she says to Link throughout the game). She states that as long as the Mirror of Twilight remains intact, she and Link could see each other again someday, before throwing a tear into the Mirror, shattering it completely. Midna returns to her realm just before the Mirror shatters, destroying the only known bond between the two worlds; however, this may not exclude the possibility of Midna returning in a future game.

Like Navi in The Legend of Zelda: Ocarina of Time, Midna acts as a guide who helps the player learn the controls and advance in the game. Unlike the fairy companions, she does not offer information on enemies and talking to her will give Link a small tip on what the player must do to progress or to defeat a boss. While Link is in wolf form, she usually rides on his back and assists him with an attack that creates a field of dark energy, allowing Link to lock onto any enemies within it and charge at all of them consecutively. When her icon appears, she can assist Wolf Link with jumps that Link cannot normally perform. In the Light World, she appears as a somewhat ghostly silhouette composed of shadow, yet can still communicate with Link and is needed to pass into the twilight from the Light World.

Early in the game, Midna will allow Wolf Link to teleport to Twilight Portals across Hyrule, thus quickly spanning great distances. Once Link obtains the Master Sword, calling Midna will allow Link to freely transform into wolf form and vice versa (except for when in the presence of people, where Midna will forbid transforming to avoid startling them). Her hair can form into a hand, allowing Link to jump to faraway locations, to open doors, or to catch charging enemies.

Midna has a variety of powers from her tribe's shadow magic, which include:

In the official Twilight Princess trading card deck, Midna has two cards: one for her imp form and one for her true form. The trivia information on the back of Midna's imp card states that, while in imp form, she is four feet tall. Midna's true form card, "Princess Midna," is one of the nine gold cards in the trading card series.

The interaction between Link and Midna near the end of the game, as well as her unfinished sentence before shattering the mirror, hints toward a possible romantic attraction between the two.

The Mirror in the Basement

In the basement of Link's House, there is a mirror that will reflect the image of anything except Midna's reflection. Some fans see this Easter Egg as symbolizing that Midna has no soul; this is unlikely, however, considering how kind Midna is to Link throughout the second half of the game. It may instead show that Midna simply does not belong in the Light Realm and, thus, has no reflection. It should be noted also that in order to see the mirror in the darkness, Link must use his wolf form's senses. If called out while Link is in Human Form, she will appear as a shadow.

Her reflection is also missing on the ice on frozen Zora's River. However, when Wolf Link is in the Light Realm, Midna's shadow is still visible as part of his shadow, as if she were still riding him.

The name "Midna" may have been derived from the word midnight, meaning the middle of the night; this further plays on the theme of the times of day in Twilight Princess.

Midna dying from being exposed to light

Midna's trophy from Super Smash Bros. Brawl
Add a photo to this gallery
Retrieved from "https://zelda.fandom.com/wiki/Midna?oldid=357660"
Community content is available under CC-BY-SA unless otherwise noted.