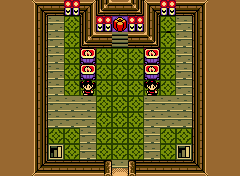 The Middle House serves as the town hall of Symmetry Village in Oracle of Ages.[1]

Like the rest of the village, the building is entirely symmetrical on the inside and the outside. At the far end of the house is a raised pedestal that holds in place the Tuni Nut, the city's greatly worshiped symbol that gives balance to the village.[2] The house is inhabited by twin sisters, who will welcome Link to the village.[3] Both the twin sisters have husbands who live on opposite sides of the village. The two husbands also happen to be twin brothers.

When Link first arrives in the village in the past, the Tuni Nut will be broken, causing the village to be unbalanced. The volcano inside the village will begin to erupt, and the area will fall into chaos,[4] which will carry on into the present. Upon entering the Middle House, the twin sisters guarding the Tuni Nut will ask for his help.[5] They explain that the nut must be brought to Patch atop Restoration Wall to get it fixed.[6] However, neither of their husbands, the twin brothers, are able to bring the nut to Patch (one is injured, and the other cannot leave without his brother or else the village will be asymmetrical). As such, Link must take on the task himself. Once the Tuni Nut is fixed and placed on its pedestal in the Middle House,[7] balance and peace will return to the village,[8] calming the volcano,[9] and allowing Link to enter the Skull Dungeon in the present.

The Middle House has a basement floor which serves as Thomas' home, where the Cheesy Mustache is obtained in exchange for the Dumbbell. In a Linked Game of Oracle of Seasons, Link will learn a secret that can be told to one of the twin sisters, who will then upgrade Link's Ring Box.

The Middle House disappears in the present, replaced by a few Trees (including a Gale Tree).

In a Linked Game of Oracle of Seasons, a girl appears in Holly's house who greatly admires the two twins of the middle house, as they are apparently the authors of her favorite book. She wishes to tell them a "touching secret", which Link can tell the twins.[10] Doing so will reward Link with a Ring Box upgrade.[11]