Not to be confused with Shopkeeper. 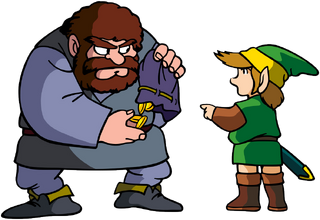 The Legend of Zelda
Breath of the Wild

Merchants are recurring characters in The Legend of Zelda series.[1][2][3]

Merchants can be found travelling to and from different Stables, as well as on the paths between Stables and towns. When it's raining, most merchants will change out their stock, selling better items than they do during regular weather.

In The Wand of Gamelon, the Merchant is the owner of the General Store in Sakado.[5] He sells Zelda Rope, Lantern Oil, and Bombs. His mannerisms suggest that he is quite sinister and greedy, and is more interested in making a profit.[6] If Zelda does not have enough Rubies to afford something, he suggests that she fight a few Goriyas.