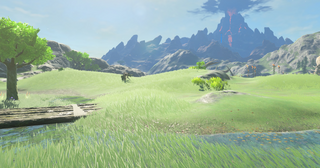 Mercay Island from Breath of the Wild

Temple of the Ocean King
Mercay Island is a recurring location in The Legend of Zelda series.[1][2]

In Phantom Hourglass, many earthquakes occur on Mercay Island.[3][4] These earthquakes often cause the bridge connecting the western part to the eastern part of the Island to collapse.[5] This forces the islanders to get from one side of the Island to the other by going through an alternative path that leads to a dark cave filled with monsters.[6][7] This happens to Link early in the game, forcing him to take a route though dangerous caves.

Link can find Oshus's Sword in the latter's storehouse,[8] a cave next to Oshus' house. The Sword is kept behind a locked door to prevent people from touching his belongings.[9] In order to open the door, Link must write a certain number on a sign, this number corresponds to the number of Palm Trees on the Island's beach: seven.[10]

In the main port village[11] on Mercay there is a shop selling Treasure, Potions, Power Gems and a Wooden Shield. There is a Tavern as well where Link must ask about Linebeck's whereabouts; he later meets Linebeck in the Temple of the Ocean King. Additionally there is a Shipyard where Link can get the Salvage Arm repaired and change Ship Parts, giving the Ship more stamina and a different look.

Mercay Island has a smaller island off its north-eastern coast, on which Link meets Freedle and gains a Wisdom Gem as well as a Treasure Map.

Mercay Island is located in the Lanayru Wetlands in Breath of the Wild.

Mercay Island is named after Mercator projection, a technique for displaying maps.[12]