Mellie is a character from The Legend of Zelda: Breath of the Wild. She is a Sheikah who can be found at Kakariko Village in the region of West Necluda. She is the wife of Olkin the pumpkin farmer and is a farmer herself raising the plum garden originally planted by Impa.

Mellie herself happens to care for and raise plum trees. She is very protective of them and guards her trees during the daytime, scolding Link if he intrudes in her garden or drops food into it to attract birds, though she has no issue with the cucco in her farm. Her reason for being so protective of the garden is the trees were planted by the village elder and oldest living Sheikah to remain in village Impa on the same day Mellie was born and as a result they are special to Mellie who took over caring for the garden apparently with Impa's blessing. She respects Impa greatly having known her for her whole life. If Link destroys her trees, she will scold him for intruding and then scold herself for telling off Link when her plum trees are gone, not knowing it was him who did it. She will then express self pity and say that when the plum trees died, so did the meaning of her life. Furthermore, if it's raining when Link destroys her plum trees, she will say that she was born on a rainy day so it would make sense for her soul to die on a rainy day. However like all destructible trees in Hyrule, they regrow quickly if Link leaves the area and Mellie returns to raising them as if it never happened.

During evening she will cook dinner for herself and Olkin, much to his delight. She has a special outdoor kitchenette with a Cooking Pot that is sheltered from the rain unlike High Spirits Produce's Cooking Pot which Trissa allows villagers such as Koko and travelers to use but is uncovered preventing anyone from cooking when it rains. Mellie's Cooking Pot has a different design but functions just like other pots. When Mellie cooks in the evening its Campfire is lit and despite Mellie using it Link can cook with it which Mellie allows with no complaints. Link can use Mellie's Cooking Pot at any other time of day by lighting its campfire. However its status as a useable Cooking Pot is not broadcasted thus Link must discover it on his own. As it is shealted by the kitchenette it can be used even if its raining a fact that even the local Koko apparently is unaware of. If spoken to while cooking, Mellie notes that its not that Olkin really hates Trissa's husband Steen the Swift Carrot farmer as in reality he simply can't stand carrots which apparently colors his opinion of Steen fuelling his dislike for Steen along with their different personalities and Steen's prohibiting Trissa from selling Olkin's Fortified Pumpkins at High Spirits Produce. Mellie finds her husband's rivalry with Steen to be petty and like Trissa apparently is frustrated by how the two grown men can't get along and/or resolve their differences. She also admits she just doesn't understand what it is about men being so petty implying she gets along with Trissa who confirms she'd sell Olkin's Fortified Pumpkin were it not for Steen's objections. Olkin loves his wife's cooking and considers her Tough Fortified Pumpkin dishes to be out of this world indicating she is an expert when it comes to coming up with Fortified Pumpkin recipes. She apparently uses her husbands Fortified Pumpkins due to his passion for growing them and view that the best offense is a good defense.

At night she will sleep in her house to be joined by Olkin later. If Link wakes and talks to her, she will admit that her breath is very shallow when she sleeps so Olkin often wakes her out of worry.

If Link is in her house before she gets in to go to bed, she'll shout "THIEF!" before realizing it's just Link, stating that he nearly gave her a heart attack. Strangely, she will not call out if Link is in her house when she wakes up. Her calling him THIEF is likely a reference to Link's Awakening.

If spoken to in the morning while it is raining, Mellie will pity Link not having an umbrella and reveals the hats the Sheikah wear are special umbrellas though laments she is forbidden from lending it to non-Sheikah such as Link.

Mellie shares a house with her husband, Olkin.

Mellie's house, as every other house in Kakariko Village, has a bar-shaped hole cut above the door to let air in with iron bars covering it for security, a Japanese sliding door with the Sheikah symbol on the opaque screen, a thatched roof resembling the Sheikah hat which has a wavy line of wood on top, a small arched window with wooden red cross-shaped muntins across it, wooden beams extending around the house as a decoration, a Japanese paper lantern hanging to the right of the door and six mortar and pestle sets fitted with a brown plank and five rocks. A singular plum tree stands outside the front of her house. The couple also owns a farm of tea plants to the left of their house. An array of straw hats and wooden pestles hang from the back of the house. A stream runs by the back of their house, where the water is lifted into a waterwheel which is the transferred down a wooden halfpipe into a puddle which is used by Steen to water his Swift Carrots. Olkin's Fortified Pumpkin farm resides to the right of the house

Her outdoor kitchenette shelters the Cooking Pot Mellie uses to cook dinner in the evenings. Despite its different design, Link can use it like any other cooking pot and Mellie has no problem with him using it even while she's apparently using it. As it is sheltered, it will remain lit even if it rains. However Link must lit its campfire when Mellie isn't using it.

The inside of the house is decorated with black line patterns across the walls in a neat fashion. The house's interior has more space upwards than it has sideways, so the only real room in it is the bedroom. Olkin and Mellie sleep in separate beds separated by a bedside table which has a tea set in the center, most likely farmed from the plants outside. Above the beds is a fancy wooden beam holding a lantern. A woven bucket of planks sits south of Mellie's bed, most likely to make a similar contraption to Steen's to water his pumpkins. To the right of the entrance is a floor shelf, holding apparent board games and a smaller bucket of planks as well as a jar and small chalkboard, the latter possibly being used for making plans for the contraption. To the left of the entrance is another floor shelf full of boxes and what seem to be Olkin and Mellie's diplomas from passing Sheikah School. Two sun hats are situated by the window of Olkin's bed. 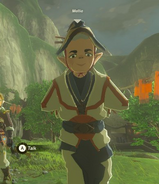 Mellie's plum garden where she stands guard all day
Add a photo to this gallery
Retrieved from "https://zelda.fandom.com/wiki/Mellie?oldid=538057"
Community content is available under CC-BY-SA unless otherwise noted.