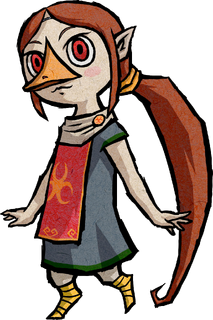 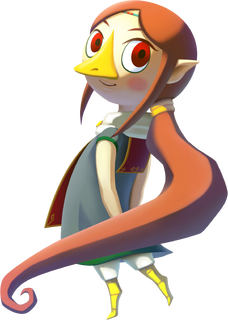 Medli is a character in The Wind Waker.[4] She is a young Rito, and the apprentice attendant of Valoo, the patron deity of the Rito.[5][6] She is close friends with Komali and is always watching and worrying over him. Medli is known to be kind-hearted and responsible and, when it comes to helping others, she is not afraid to take on challenges and other obstacles that might get in her way despite not being able to fly too well.[7] Medli accompanies Link into two dungeons, Dragon Roost Cavern and the Earth Temple, in order to fulfill her job as attendant of Valoo and as the Sage of Earth, respectively.

Even during her free time, Medli can be seen and heard trying to improve her skills as Valoo's attendant by practicing her most valued possession: the Rito Harp.[8] She is also notable as one of the few characters that can be controlled other than Link.

Some time before The Wind Waker, Medli was chosen by Komali's Grandmother to become her apprentice and successor as Valoo's attendant.[9] Komali's grandmother saw the harp that Medli was carrying and had sensed what destiny had in store for the young girl, but kept quiet about it; instead, she used her position to teach Medli all that she had to know until the day fate would call her.[10] However, Komali's grandmother passed away, leading Medli to became the new attendant of Valoo,[11] but unlike the former attendant of the Sky Spirit, Medli could not fully understand Valoo's language and thus was not too confident in her abilities.[6]

One day, Gohma appeared in the Dragon Roost Cavern and began tormenting Valoo's tail, causing the Sky Spirit to go into a fit of rage. Valoo's home became inaccessible and Medli could no longer fulfill her job as his attendant. Moreover, since Medli was not as knowledgeable with the Sky Spirit's language, she could not truly comprehend why Valoo had begun to go berserk. Due to this, Medli feels it is partly her fault that Prince Komali has shut himself in and lost his confidence to go and ask Valoo for his pair of wings: for if Medli had possessed some of Komali's grandmother's strength, the prince of the Rito would have more faith in himself.[12]

Eventually, Link arrives on Dragon Roost Island and is asked to meet with Medli so that the hero can give Prince Komali a letter from his father.[13] After handing over the letter, Medli in turn asks Link to meet her at the entrance of Dragon Roost Cavern once he has spoken with Prince Komali.[14] Link complies with Medli's favor and goes to meet her at the entrance of Dragon Roost Cavern, where she expresses her blame about Prince Komali's rude behavior towards Link.[15] She also asks that Link help her reach Valoo by giving her a lift to the entrance of the cavern.[16] Medli successfully gets some wind under her wings and reaches the entrance, where she thanks Link and asks that Link looks out after Prince Komali if anything is to happen to her as she climbs Dragon Roost to meet with Valoo.[17] Just before she departs, she gives the Link an empty Bottle, and wishes good luck to the both of them.[18]

Link promptly follows Medli into the cavern after he hears that several Rito saw her get kidnapped by monsters.[19] After ascending Dragon Roost Cavern, Link finds her locked up in a cage high atop the mountain where she is being guarded by two Bokoblins. Link gets rid of them and frees Medli, who informs him that a creature is tormenting Lord Valoo's tail. She asks him to save the Sky Spirit and gives him the Grappling Hook to help him reach Valoo, which is what she used to get to the top of Dragon Roost.[20] Medli then takes off to get help from the other Rito.

After saving Valoo from Gohma, Link, Medli, and Komali meet on the beach of Dragon Roost Island, where Medli supports Komali in giving his most precious possession, Din's Pearl, to Link. As Link does not understand ancient Hylian, Medli kindly translates Valoo's words of gratitude to Link and also gives her interpretation of the Sky Spirit's hints of where Link should go next.[21] They say goodbye to each other when Komali runs away to obtain his pair of wings from Valoo and Medli feels she need to go with him.[22][23]

With the Sky Spirit now safe, Medli goes back to studying for her job as Valoo's attendant, practicing her harp on one of the cliffs of Dragon Roost Island.[24][8] Once Link meets Laruto, the former Sage of Earth before Ganondorf murdered her, she informs the hero that he must look for the one carries the same sacred instrument as her, a harp, and play the "Earth God's Lyric," the melody that will awaken the new Sage of Earth.[25] Link returns to Dragon Roost Island where, upon finding Medli, she reveals that Prince Komali has been asking all about his adventures, expressing her pride in him yet also sadness that Komali is now doing things without her guidance.[26] As instructed by Laruto, Link conducts the "Earth God's Lyric" as Medli plays along with her harp, which causes the young girl to faint.[27] She meets Laruto in her dreams, where the two of them play the sacred song. Realizing her new duty, Medli wakes up as the new Sage of Earth, overwhelmed by the fact that she can actually do something to help the world.[28] She asks that Link take her to the Earth Temple, quietly and quickly, for she wishes for Prince Komali to not take notice of her departure and to just remember her as a simple attendant.[29]

Once at the Earth Temple, the King of Red Lions advises Link and Medli how to progress through the temple, resulting in Link gaining control of another character.[30] The basic setup in the temple is that Medli closely follows Link unless she cannot for whatever reason or because Link commands her to stay still. By pressing the R Button, Link can call Medli to him. By using the "Command Melody," Link can take control of Medli and can use her ability of flight to reach places otherwise inaccessible, and can also use her harp to deflect rays of light, which are often used as part of light puzzles. Medli can also be picked up and carried by Link to reach certain areas. Though Medli is not yet proficient at flying, she can carry Link across gaps for a short amount of time.

Link temporarily leaves Medli to fight Jalhalla, but she joins him again after the defeat of the giant Poe to fulfill her duty as the Sage of Earth. Link conducts the "Earth God's Lyric" for Medli as she plays the song on her harp. As they play it, Laruto temporarily appears next to Medli to play along. This restores some of the power of the Master Sword, to which the young Rito takes notice and urges Link to go to the Wind Temple to completely restore the legendary blade's full power. Medli stays inside the Earth Temple continuing to pray so that the Power to Repel Evil can return to the Master Sword.[31] As Link departs back to the Great Sea, Medli asks Link to watch over Prince Komali for her.[32]

Medli appears for the final time during the ending scene. Together with Tetra's Pirate Crew, Aryll, Prince Komali, and Makar, she picks up Link and Tetra after their battle with Ganondorf.

In Super Smash Bros. Brawl, Medli appears as a Trophy and Sticker.

Medli was added as a villager in the Welcome amiibo update of Animal Crossing: New Leaf, alongside Wolf Link, Ganon, and Epona. If the Toon Link amiibo is scanned into the game, Medli will show up at the campground and can be asked to move into the town. She is a Bird villager that has a Normal personality, and is thus kind, a little shy, and easy to befriend. Her birthday, December 13, references the Japanese release date of The Wind Waker.

Medli attacks by strumming her Rito Harp, similarly to Sheik, and launching sphere-shaped gusts of wind at enemies. She can also summon a tornado to trap enemies, then reflect light off her harp to damage them, or by flying into the air before dive-bombing enemies. One of her more powerful combos allows her to attack a large group of enemies with light, gathering them into a small cluster then blasting them away as a symbol resembling Din's Pearl appears on the ground. Her Special Attack has her gather enemies with a gust of wind before headbutting them away, which leaves her stumbling dizzily for a few seconds, much like when Link throws her into a wall in The Wind Waker.

When defeated in battle, Medli may drop Ruto's Earrings as a silver Material or Ruto's Scale as a gold Material.

In Super Smash Bros. for Wii U, Medli appears as a Trophy.

Medli appears as a Support Spirit in Super Smash Bros. Ultimate. When equipped, she grants immunity to strong winds.

Due to The Wind Waker being heavily associated with music, it is possible that Medli's name could be a pun on "Medley" or "Melody". Medli's name also sounds similar to the Sanskrit name "Medini", which means "earth".