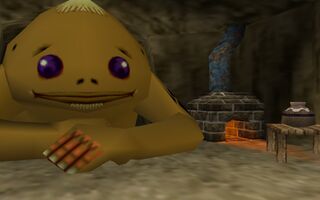 Medigoron's Blade Store is a location in Ocarina of Time. As its name implies, the store is owned by Medigoron and it is where he forges and sells the Giant's Knife.[1] It is located on the third floor of the Goron City, but its entrance is initially blocked off by cracked walls that can be taken down with either Bombs or the Megaton Hammer.

The store itself is really cramped since Medigoron takes up most of the room.[2] The only things visible are a stove and a Gossip Stone. Medigoron only starts selling the Giant's Knife for 200 Rupees during Link's adulthood.[3] Although the Giant's Knife is twice as powerful than the Master Sword, it will break after a few hits, greatly reducing its dealing power.[4] Link can continue to buy the Giant's Knife from Medigoron until he obtains the Biggoron's Sword from Biggoron, at which point Medigoron will stop selling the knife to the young hero.