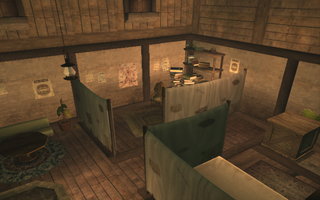 After Link delivers Renado's Letter concerning how to recover Ilia's memory to Telma, she directs him to Dr. Borville, stating that he was the last one to tend to her before bring her to Telma's Bar.[2] Given his uncooperative nature, Telma gives Link an Invoice to encourage the Doctor's participation.

At the Medical Clinic, Link can present the Invoice to Dr. Borville, leading him to reveal that he doesn't have the means to pay it,[3] chiding the fact that he lost the Wooden Statue Ilia left behind, which he planned to pawn. He explains that he spilled odoriferous medicine onto the Wooden Statue and left it to dry outside, where it was stolen.[4]

Afterwards, Dr. Borville returns to his work, allowing Link to explore the clinic and push a box that was covering the Medicine Scent. By transforming into a wolf, he can learn the new Scent and follow it outside of the Medical Clinic to locate the Wooden Statue.

In Twilight Princess HD, various pages in Hylian language were added by graphic designer Blake Hollins. These pages tell stories about Blake himself.