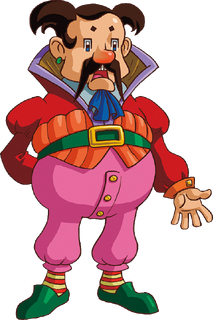 Mayor Plen is a character in Oracle of Ages.[2]

Mayor Plen is the mayor of Lynna City. He gives Link some information about the history of the City.[3][4]

In a Linked Game of Oracle of Seasons, a golden Subrosian will appear in Lava Lake. He will tell Link a secret meant for Mayor Plen back in Labrynna.[1] When Link tells the secret to the Mayor, he will give Link a Magic Ring, which, once appraised by Vasu, will become the Spin Ring. In a Linked Game of Oracle of Ages, Mayor Plen's grandmother will appear in his home. She has a Secret for Link to tell to Mayor Ruul in Holodrum.[5]