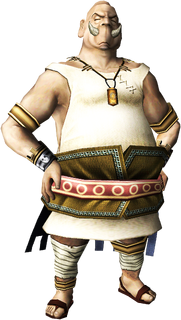 Mayor Bo is a character in Twilight Princess.[3]

Mayor Bo is the Mayor of Ordon Village and father of Ilia.[4] He is first seen in front of the mayor's house by the road that leads up to Ordon Ranch. If Link speaks to him on the second or third day, a sequence where an Ordon Goat comes rushing down the road will be triggered.

When Link fails to reach Death Mountain due to the Gorons' strength,[5] Mayor Bo teaches him the secrets of sumo wrestling in his home. He tells Link that he defeated the Goron patriarch Gor Coron using the Iron Boots.[6][7] He then gives the boots to Link, which ultimately helps the young hero defeat Gor Coron in a sumo wrestling match, allowing him entrance to the Goron Mines. Later, when Link speaks to Gor Coron, he will say that it is fortunate that Ilia looks more like her mother instead of Bo.[8]

Bo is based on the Norse nickname Bua, which means "to live".[9]