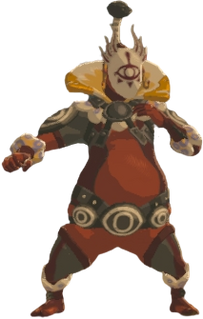 Master Kohga from Breath of the Wild

Master Kohga is a recurring character and Boss in The Legend of Zelda series.[4]

Link meets Master Kohga during the "Divine Beast Vah Naboris" Main Quest outside of the exit of the Yiga Clan Hideout in an open area with a large pit in the center. Master Kohga will recognize that Link is the hero he has been searching for and initiates a battle.[10] After defeating Master Kohga, he will use his last bit of energy to perform his "secret technique", which backfires and causes him to fall down the large pit in the center of the area.[11] While falling down the pit, Master Kohga is heard yelling that he shall be remembered and the Yiga Clan will track Link to the ends of Hyrule.[12] As a reward, Link will receive a Treasure Chest containing the Thunder Helm.

The fight against Master Kohga consists of three phases, each of which utilizes his control over magnetism and levitation. In the first phase, Master Kohga conjures up a rock above him to hurl at Link. Striking Master Kohga from afar as he levitates in the air, such as with a Bow, Remote Bomb or thrown Weapon, will break his focus and cause the rock to fall on his head. This temporarily stuns Master Kohga, partially burying him in the ground and allowing Link to attack him unopposed. In the second phase, he levitates above the large pit nearby and conjures up two rocks that spin around him. Link must hit Master Kohga when one of the rocks is directly above his head, causing it to once again fall on his head and stun him. In the third and final phase, he conjures up a fortified boulder to attempt to crush Link. Link must use Magnesis to gain control of the boulder and push it back towards Kohga. This will stun Kohga once again and give Link the opportunity to finish the fight. In all phases, he is protected by a blue shield which disappears when he goes offensive in the first two stages but remains permanently during the third. Ancient Arrows act like normal arrows when he is hit with one, and Master Kohga and his boulders cannot be stopped with Stasis at any time. He is the only notable Sheikah to display this, as even Monk Maz Koshia can be placed under Stasis.

In Super Smash Bros. Ultimate, Master Kohga appears as a Primary Spirit, first appearing in the Hyrule Warriors: Age of Calamity event on January 8th, 2021. Master Kohga holds the skill, Weight 🠅, which increases the weight of the Fighter.

Master Kohga retroactively debuts in Hyrule Warriors: Age of Calamity, first disguising himself as Urbosa to try and turn the Gerudo against Zelda, but is zapped by the real Urbosa. He is later defeated but is saved by Sooga at the last minute.[13] He is later shown working alongside Astor as he explains about Ganon's Harbinger form, and the role the Demon King will play in due time.

Later, the Hyrulean Army raids his hideout and defeats them, despite his best efforts. Kohga berates Astor for missing the show and wants Sooga to kill him,[14][15] though they relent when the prophet ominously explains that Kohga and the Yiga Clan would become enemies of Calamity Ganon by harming him.[16]

Later, after Ganon awakens on Zelda's 17th birthday, and the Blight Ganons are stopped from killing the Champions like they were supposed to in Breath of the Wild, he objects to Astor harvesting souls from his men to revive the Blight Ganons, and is almost killed himself by a Hollow of Link, but Sooga intervenes and tells him to run, stating that he would give his life to protect him. Kohga ultimately chooses to stay and fight alongside him. The outcome of the battle is revealed in EX The Yiga Clan’s Retreat Scenario where they fight through many of their former allies and even the 4 Blight Ganons once again, though Master Kohga and Sooga manage to escape to Crenel Peak, where the Blight Ganons strike once again, though Sooga manages to freeze the 4 Blights so Master Kohga can escape. It is unknown what happens to Sooga After Zelda has awakened her power and rallies the Hylians, he sheds his Hyrulean Soldier disguise and bows before Zelda, joining the Hyrulean forces in order to avenge his betrayed clan.

At a unknown point, Master Kohga appears during the EX Liberate the Royal Ancient Lab Scenario where he and the Yiga Clan try to stop Urbosa and Riju from helping the Hyrulean Forces. He is defeated yet again, but takes the Thunder Helm from Riju and boasts that Urbosa can't hit him with her lightning this time,[17] though it strikes him again. Kohga vows to steal the Thunder Helm again and properly master it, even if it takes him a 100 years to do so, referencing the successful theft of the Helm in Breath of the Wild[18]. Kohga also appears as the main character for the EX The Yiga Clan’s Retreat Scenario. A flashback after the Scenario is completed reveals that Kohga gave a young Sooga a Mighty Banana to help him despite 2 Yiga Footsoldiers having him dead to rights.

The name Kohga is inherited by leaders of the Yiga Clan.[19] Together, the Yiga Clan and Kohga references the rival Ninja clans of Iga and Kōga; this is mirrored by the Yiga Clan having a rival clan, the Sheikah.