Zelda Wiki
Register
Don't have an account?
Sign In
Advertisement
in: Items, Breath of the Wild Pages with Invalid or Missing Terms, Divine Beasts,
and 3 more
English 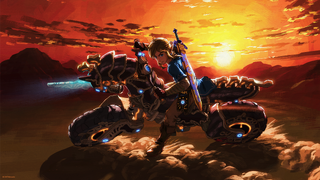 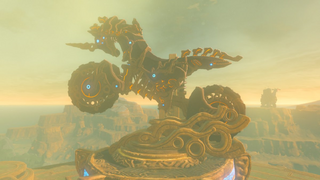 The Master Cycle Zero is a recurring Item in The Legend of Zelda series.[1][2] As part of the "EX The Champions' Ballad" Main Quest, it is revealed that the Hylian Champion can acquire a Divine Beast of his own through completing the trials given by Monk Maz Koshia. After defeating the monk as part of his final trial, he will award Link with the Master Cycle Zero, a Divine Beast created for the "true hero". Like the other Divine Beasts, it is modelled after an animal, specifically a Horse though unlike the other Divine Beasts it is much smaller in comparison and takes the form of a motorcycle with a horse motif. Due to its Horse design, certain characters like Konba identify it as such. Link can activate it via the Master Cycle Zero Rune which allows him to summon the Master Cycle Zero, though he is unable to do this in certain areas such as Gerudo Desert. Like a Horse, Link can mount and ride it, engage in mounted combat while riding it, and use it to run over enemies. However unlike Horses, it requires Fuel which can be produced by filling its tank with materials.

If Link attempts to mount the Master Cycle Zero in a Foot Race, he will be disqualified under the condition that it is a "Horse".[8]

The Master Cycle Zero is unlocked immediately after downloading the update.

The Master Cycle appears as an unlockable weapon for Princess Zelda after clearing the Top-Secret Request in the Royal Ancient Lab.