Zelda Wiki
Register
Don't have an account?
Sign In
Advertisement
in: Loruleans, Characters, Characters in A Link Between Worlds 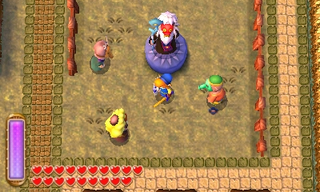 The Masked Followers are a group of Loruleans that have begun to wear masks in the images of monsters. They are a cult led by the Masked Elder, who preaches to his followers and visitors to resist the corruption of thievery and to don the masks of monsters,[1] which he states will bring them salvation from Lorule's deteriorating world.[2][3] These beliefs are shared by the members.[4] The Masked Elder can be found standing on a pedestal in Thieves' Town, preaching to three of his followers. While only this group state themselves to be Masked Followers, other people wearing masks can also be found throughout Lorule, implying a connection to the main group. The Captain in the Thieves' Town Milk Bar also suggests there are more followers.[5]

Two characters are referred to as Masked Follower by name. The male Masked Follower can be found with the Elder, and mentions to Link how the statues to the north of town are entrances to a hideout,[6] hinting the location of the Thieves' Hideout. Although frightened, he had tried to knock on the door, but was told to leave. The female Masked Follower complains how she cannot see through her mask's eye, but implores that Link also wear a mask and be saved.[4] Another follower, the Masked Granny, states she is the Elder's housekeeper and was made to join as part of the job.[7]

The Masked Followers have a tendency of saying "Mumbo jumbo" at the end of their conversations.[3][4] Given that the Masked Granny was made to join, it may be that some followers may have been forced into the group.

Loruleans in The Legend of Zelda series
Community content is available under GNU Free Documentation License unless otherwise noted.
Advertisement