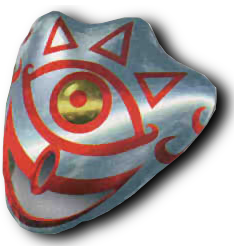 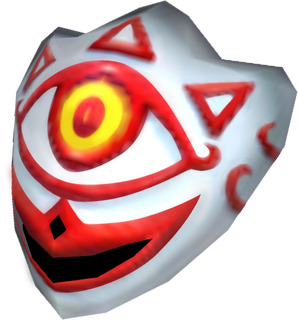 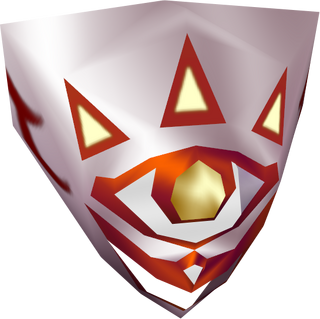 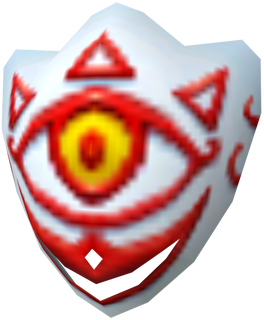 In Ocarina of Time, the Mask of Truth can be borrowed from the Happy Mask Shop after completing the Mask Trading Sequence. Wearing the mask allows Link to speak to Gossip Stones to learn new things about Hyrule and its inhabitants. The Happy Mask Shop Owner mentions that the mask was passed down by the Sheikah.[2]

If Link wears the Mask of Truth in the Forest Stage of the Lost Woods, he will receive a Deku Nut upgrade.

In Majora's Mask, the Mask of Truth is given to Link by the Cursed Rich Man in the Swamp Spider House. According to him, he was told that he could become rich if he were to look inside, and was then given the mask. However, he became cursed as he went inside, and was turned into a Skulltula-like creature.[3] He tasks Link with defeating the 30 Gold Skulltulas in the house to lift the curse, and rewards him with the Mask of Truth as thanks.

Wearing the mask allows Link to speak with Gossip Stones.[4] Many Gossip Stones give clues on how to find other masks. The mask also imbues Link the ability to read animals' minds.[5] This is mainly used in the Doggy Race to see which dog might win.[6] The item description for this mask is the only direct reference to the Sheikah made in the game.[7]

In Majora's Mask 3D, due to the lack of rumble feature and the Shard of Agony, the Mask of Truth can locate hidden grottos. Wearing the mask causes the ground above the grotto to glow. However, this ability is never explained in the game.

The Mask of Truth appears as an Item for Skull Kid in the Symphony of the Mask DLC pack, found in the River of Ice by giving the fisherman a Golden Fish.[8] When equipped, Skull Kid is able to use a Titanium Dagger and gains the ability to see through some objects.[9]