Zelda Wiki
Register
Don't have an account?
Sign In
Advertisement
in: Items, Listings, Side Quests,
and 16 more 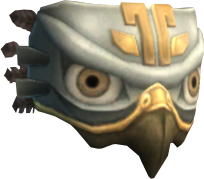 The Hawkeye from Twilight Princess

A Link to the Past (Ishinomori)
Freshly-Picked Tingle's Rosy Rupeeland
Hyrule Warriors
Cadence of Hyrule
Hyrule Warriors: Age of Calamity
Masks are recurring Items in The Legend of Zelda series.[name reference needed] Masks go unnamed in The Minish Cap.

In Ocarina of Time, Masks are part of the Mask Trading Sequence. In it, the Happy Mask Salesman of the Happy Mask Shop lends Link a Mask and has him look for a character to sell it to. Link is then tasked to return to the shop to bring back the Rupees used to purchase the mask, sometimes even having to pay out of his own Wallet when the costumer refuses to pay the appropriate amount. Link is continuously given another Mask to sell until the Happy Mask Salesman has no more left to sell. This allows Link to borrow any of the Masks, plus a few additional ones, to wear around Hyrule.

The Masks are only obtainable and usable while Link is a child. Most of the Masks possess no abilities when worn, however, some like the Skull Mask and the Bunny Hood do grant small abilities.

In Majora's Mask, numerous Masks appear. Some give certain abilities when worn, while others completely transform Link's form.

In Oracle of Ages, the Doggie Mask is part of the Trading Quest. It is given by the Happy Mask Salesman in exchange for the Tasty Meat. The Mask is then given to Mamamu Yan in Lynna City for her dog. She gives Link the Dumbbell in return.

Jalhalla, the boss of the Earth Temple, is a mask that boasts control over Poes. Link must defeat the fifteen Poes that make up its body in order to defeat it.

Masks appear on walls in The Minish Cap, specifically the walls in Mayor Hagen's House and the Royal Hyrule Library. If Link uses the Pegasus Boots to Dash into the wall near a Mask, it will fall off and break on the ground, occasionally dropping Rupees.

In Twilight Princess, the Hawkeye is a Mask which, when worn, allows Link to view long distances. It is also compatible with the Hero's Bow, which produces a cross-hair for firing. The Mask can be bought from Malo in Kakariko Village's Malo Mart for 100 Rupees after completing Talo and Malo's Bow minigame.

The Fused Shadow is a type of Mask that possesses immense power. The Mask holds the magical power of the Dark Interlopers, and was used in the Interloper War. By order of the Goddesses, it was sealed away by the Spirits of Light. It was broken and divided into four parts, which Midna tasks Link with finding during the first half of the game. The helmet Midna wears is one part of the Fused Shadow.

The Zant Mask is an enemy that resembles a giant version of Zant's mask helmet. It only appears in the Palace of Twilight.

In Freshly-Picked Tingle's Rosy Rupeeland, Tingle receives a Mask for defeating Baron. The origin of this Mask is debated, with a different story told by each Bodyguard, and is immediately sold to that Bodyguard. It has no purpose beyond this financial reward. 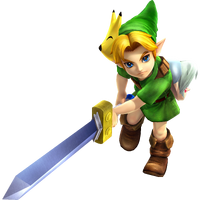 In Hyrule Warriors, the Fierce Deity's Mask and the Hawkeye appear as an Attack Badge and an Assist Badge, respectively. The Fierce Deity's Mask Badge grants Warriors an additional Special Attack Gauge. A third gauge is granted by crafting its enhanced Badge. The Hawkeye Badge increases the duration of Bow power-ups. The duration can be further increased by crafting its enhanced Badge.

Several other Masks from Majora's Mask appear as unlockable Costumes in the Termina Map, which are included in the Majora's Mask DLC Pack. A Keaton Mask is also worn by Young Link over his head.

The Mask is also a class of Weapon used by Young Link, based on the Fierce Deity's Mask. It is associated with Darkness. While Young Link primarily uses the Kokiri Sword as his actual Weapon in battle, he can temporarily transform into the Fierce Deity as part of his Weak Point Smash, Special Attack, and predominately his Focus Spirit. While in Focus Spirit, the Kokiri Sword transforms into Fierce Deity's sword, and his attack power, speed and range is heightened for the duration of the Focus Spirit. As Young Link is able to play the Ocarina of Time to empty his Special Attack Meter and fill his Magic Meter, it is possible for Young Link to stay in his Focus Spirit for lengthy periods of time.

In Hyrule Warriors Legends only, the fourth form of the Mask is the Inflamed Deity's Mask, which is associated with both the Elements of Fire and Darkness.

Young Link dons the Fierce Deity's Mask and, after prepping his sword, swings it in a wide Spin Attack. This attack hits a wide range ahead and around Young Link, and carries the Darkness Element.