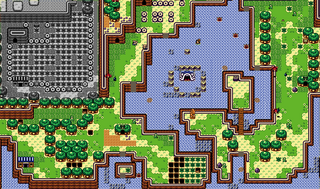 Catfish's Maw
House by the Bay

Martha's Bay is a location in Link's Awakening.[1]

Martha's Bay is a small water inlet on the south coast of Koholint Island. This region borders Toronbo Shores to the west, Ukuku Prairie to the north, and Animal Village to the east. Another region east of the bay is simply called East of the Bay, but is inaccessible from the bay proper, as is the region to the northwest known as Pothole Field. The fifth dungeon, Catfish's Maw, is located in the center of the bay, surrounded by a reef. The abandoned home of a Ghost stands in the southwest part of the region. The Ghost is escorted back to his home by Link and makes his peace with death before returning to his grave in Koholint Prairie.

Beneath the bridge in this region is a Fisherman who has lost his fishing hook. Link trades a new Fishing Hook to him in exchange for his next catch, which is Martha's Necklace. Link can return it in exchange for one of her Scales, which reveals the resting place of the Magnifying Lens on the bay's shore by placing it on The Mourning Mermaid.

Two Telephone Booths on opposite sides of the bay and the entrance to Animal Village can be found here.

Martha's Bay is named after a Mermaid in Link's Awakening.[2]