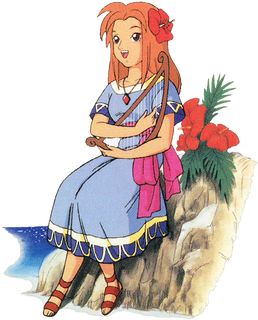 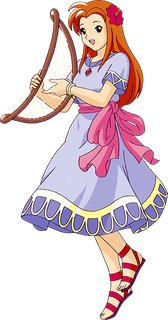 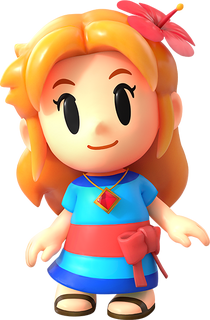 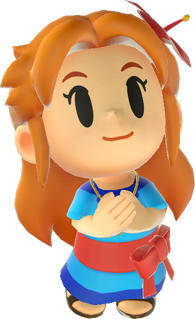 Marin is a recurring character in The Legend of Zelda series.[4]

Marin is a young girl who lives in Mabe Village with her father Tarin on Koholint Island. She saves Link when she discovers him on the Toronbo Shores after he was shipwrecked.[5][6] As she bears an uncanny resemblance to Princess Zelda,[7] Link confuses Marin with her when he wakes up at her house.[8][9][10] She is a musical woman who has many friends among Humans, Animals, and even monsters.[7]

After Link retrieves his Sword on the beach shore, Marin leaves her house and stands next to the Weathercock singing the "Ballad of the Wind Fish."[11] Later on, the path to the Yarna Desert is blocked off by a sleeping Walrus. Link learns from the Animals in the Animal Village that the lazy Walrus is fond of Marin's singing.[12] Link goes to Marin's house but finds a note left by her saying that she is at the beach.[13] When Link finds her at the Toronbo Shores, the two of them sit down on a log and Marin confesses that her heart skipped a beat when she found him on the shore, believing that he had come to give the islanders a message.[14] She goes on to say that if she were a Seagull, she would fly away from Koholint Island and sing for many people, wondering if her dream will come true if she wishes to the Wind Fish.[15] Shortly after, Marin declares that she wants to know everything about Link, but immediately laughs it off and agrees to go with Link to go see the Walrus.[16][17]

For most of Link's quest, she can be found singing the "Ballad of the Wind Fish" near the Weathercock.

Along the way, Marin and Link go through a series of misadventures, such as Marin falling on top of Link when they both go down the Well and Marin picking up the Trendy Game Shop Owner with the Crane.[18][19] When Link hits a Cucco, she also tells him off, and calls him a "bad boy" when he throws and breaks a Pot.[20] If Link hits a Cucco too many times, Marin will change her attitude for a moment as if she is enjoying the moment.[21] Once Marin wakes up the Walrus with her singing, she goes to the Animal Village and stays there to sing for the Animals.

Near the end of Link's adventure, some monsters kidnap Marin while she is singing to the Wind Fish's Egg and place her on a rotting segment of the bridge crossing between the Tal Tal Heights. Calling for help, she admits to Link that she is afraid of heights.[22] Link rescues her using the Hookshot and, for a brief moment, she begins to admit something to him, but as she is about to confess, Tarin calls and breaks the moment.[23][24]

After obtaining the Ocarina, Link can speak to Marin to learn the "Ballad of the Wind Fish". If Link speaks to her again, she will thank him for all his help and tell he is the "kindest boy" she knows, revealing that she already made her wish to the Wind Fish but refuses to tell him what it was.[25] Marin also asks that Link always remember her and the "Ballad of the Wind Fish" when the time comes for him to leave Koholint Island, for if he were to forget, she would never forgive him.[26][27]

In Super Smash Bros. Melee, Marin appears as a Trophy. In this Trophy, her hair is blonde instead of red as depicted in her official artwork.

In Super Smash Bros. Ultimate, Marin appears as a Spirit with the ability Irreversible Controls, which grants a Fighter a resistance to Inverted Controls.

In Hyrule Warriors, Marin appears as a playable Warrior. In Hyrule Warriors and Hyrule Warriors Legends, she is included as part of the Link's Awakening Pack DLC.[28] In Hyrule Warriors: Definitive Edition, she is unlocked as a Reward for Battle Victory in Battle F4 on the Koholint Island Map. She uses the Bell as her Weapon, which carries the Element of Water. Using her Bell, she can summon the Wind Fish to aid her in an assortment of attacks and her Special Attack by ringing the Bell over her head in the air.

Marin does not drop any unique Materials when defeated in battle. She instead drops Zelda's Brooch as a silver Material, or Zelda's Tiara as a gold Material.

Marin's name could come from the Latin word marinus, meaning "of the sea".[34] Marin's name resembles the word "marine," which is her French name. Also, the prefix "mar-" means "sea" in Spanish,[35] and "seagull" in Norse.[36].