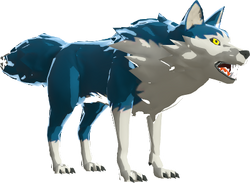 A Maraudo Wolf in Breath of the Wild

Biting
Charging
Maraudo Wolves are Creatures in Breath of the Wild.[1]

Maraudo Wolves are large canines with high haunches and ragged fur. They are quadrupeds with sharp claws on each of their toes and a long bushy tail extending from their rears. Their faces are distinct with narrowed, yellow eyes and prominent muzzles. Their ears are pointed and face towards the direction of sound. The Wolves' lips extend back when growling, exposing their carnassial teeth. They have prominent canine teeth. Maraudo Wolves can be distinguished from their relatives through their unique blue and white fur, and their preference for forested habitat.

Maraudo Wolves can be found in most deciduous regions of Hyrule Kingdom. The Hyrule Compendium specifically notes Tabantha Frontier and the Great Hyrule Forest as common locations, though they are populous in the Akkala region as well. Maraudo Wolves are highly social animals that are never encountered alone, averaging at three individuals per pack. When idle, the Wolves can be seen sniffing the ground and stretching their bodies; however, if a Maraudo Wolf spots Link, it will howl to alert its pack members and give chase. Once cornered, the Wolves encircle Link and take turns charging at him with snapping jaws, inflicting damage on contact. They will disband and retreat if one is injured or killed by Link. The Wolves will not try to attack Link if he is on horseback. Killing a Maraudo Wolf produces either Raw Prime Meat or Raw Gourmet Meat, rarer spoils than regular Raw Meat. The Raw Gourmet Meat can be given to Trott in order to complete the Side Quest, "A Rare Find".

The word "maraudo" likely derives from marauder, someone who raids and plunders.