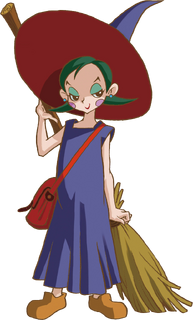 Maple is a recurring character in The Legend of Zelda series.[2][citation needed]

In the Game Boy Advance port of A Link to the Past, Maple replaces the Hooded Shopkeeper inside the Magic Shop.

Maple appears in both Oracle of Seasons and Oracle of Ages as the apprentice witch of her grandmother Syrup,[3] playing an identical role in each game. Once Link has defeated 30 enemies (or 15 while wearing Maple's Ring) and enters one of the predetermined areas where Maple can appear, her theme song begins playing its ominous opening notes as her shadow snakes across the ground, indicating her entrance from overhead. Maple then swoops in on her broomstick, making several passes around the screen. While Link can try to avoid or ignore her, a collision between the two will cause Maple to crash, scattering some of her belongings on the ground. These items may include Rupees, Hearts, Bombs, Mystical Seeds, Gasha Seeds, Magic Rings, Magic Potions, and even a Piece of Heart, which can only be collected once. The more valuable an item, the more rarely it will be dropped in the collision. Some of Link's own Rupees, Hearts, Bombs and Mystical Seeds may be dropped as well.

The apprentice witch then berates Link for his supposed carelessness and declares that she'll take all of the dropped items for herself, including any of Link's.[4] This begins a Mini-Game of sorts, where Maple and Link race around the screen to pick up as many items as possible. Maple can travel slightly faster than Link thanks to her power of flight, but requires an extra moment to lift up any items she hovers over, while Link can simply touch an item to collect it. Once all of the items have been claimed, Maple will offer a condescending remark on the young hero's performance before flying away in a huff.[5][6][7]

Though Maple has little regard for Link, she eventually comes to see their encounters as more of a game.[8] After eight encounters have taken place, Maple will appear riding a flying vacuum cleaner instead of her broom, which allows her to fly faster, but more erratically. In a Linked Game, she'll appear riding a flying saucer instead. The witch can even be encountered in the past in Oracle of Ages, having the apparent ability to fly through Time Portals.[9]

When collecting the dropped items, Maple will always fly toward the highest priority item first, even if other items are closer. Link can use this knowledge to plot the best path to collect the items he desires.

Maple plays a fairly large role in the Oracle of Seasons manga by Akira Himekawa, alongside Ricky and Link, journeying with them after meeting in the Temple of Seasons. Maple constantly says she only tags along because she wants the Rod of Seasons, but after obtaining it from Link through a stroke of good luck on her part and leaving them, Maple eventually returns to Link's aid just in time to help him defeat General Onox. She is depicted in the manga as a kind witch, despite her selfishness who does not have constant effective control over most of her spells. She is essential in the defeat of Onox.