Zelda Wiki
Register
Don't have an account?
Sign In
Advertisement
in: Items, Maps, Items in The Legend of Zelda,
and 21 more

Not to be confused with Dungeon Map or Minimap. 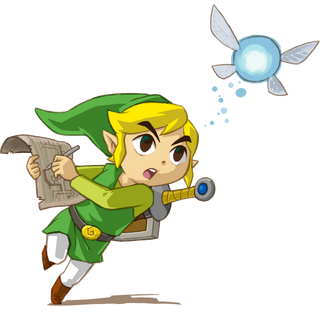 Artwork of Link drawing a Map from Phantom Hourglass

Compass
Dungeon Map
Minimap<br/Sea Chart
Treasure Map
Rail Map
Maps are recurring Items in The Legend of Zelda series.[1] They often show detailed representations of places Link can explore. There are mainly World and Dungeon Maps used for exploring their respective areas, but certain Maps exist that serve other purposes.

Maps are obviously used for navigation, but their uses have become increasingly elaborate as The Legend of Zelda series has progressed. They have been used in every game with the exception of The Adventure of Link and Tri Force Heroes. Maps detail the layout of the Overworld or a Dungeon and often show Link's current location.[2][3][4] As with Dungeon Maps, World Maps are often blank until an area is explored or a full Map of an area is obtained. In many Legend of Zelda titles, Maps can only be viewed on a subscreen, but in The Legend of Zelda, a very simplistic mini-map could be viewed in the HUD.[5] This is similar to the Map used during gameplay of Four Swords. The mini-map mechanic did not return until Ocarina of Time, in which it only shows the area Link is currently traveling and his position in accordance to the Map, as well as where he entered from.[6] The mini-map returned in every console title until Skyward Sword. Phantom Hourglass and Spirit Tracks displayed Maps on the top screen of the Nintendo DS with the ability to move them to the touchscreen to write notes and draw paths.[7][4] Despite their similarities, World Maps and Dungeon Maps often have distinct differences.

Full World Maps have been available during gameplay since A Link to the Past. Oftentimes, key locations will be marked on World Maps, such as Towns and Link’s next destination.[8][9] In A Link to the Past and every game since The Wind Waker, it often possible to magnify an area of the World Map to get a keener look at the layout. When Warping is possible, some of the titles in the series would display the World Map to show where Link can warp to. The World Map is not always used only for navigation; in Four Swords and Four Swords Adventures, the World Map is used for selection different stages. The World Map of Skyward Sword allowed Link to place light Beacons to guide the way to a chosen destination. There are diverse methods of obtaining and using World Maps throughout the series.

Dungeon Maps are found in Treasure Chests inside Dungeons. Once obtained, a Dungeon Map will allow Link to see every room of every floor in the Dungeon it was found in.