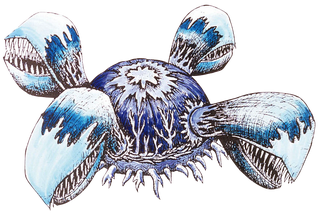 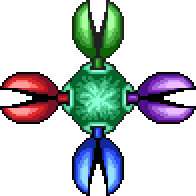 The Legend of Zelda
Oracle of Seasons
Four Swords Adventures

Heart Container
The Legend of Zelda

Manhandlas is a recurring Boss in The Legend of Zelda series.[1]

The defining characteristic of the Manhandla is its four symmetrical mouths, which are its weak points. As with all incarnations of Manhandlas, as each mouth is dispelled, the entire form picks up speed, reaching its maximum velocity upon destruction of the third mouth. After destroying all four mouths, the Manhandla is defeated.

Manhandla appears as the Boss of Level 3 of the First Quest in The Legend of Zelda. It defends a fragment of the Triforce of Wisdom. It also appears in Level 4 and Level 8 of the First Quest as well as Level 2, Level 5, Level 6, and Level 7 of the Second Quest. Manhandla is a large, spinning, man-eating flower with the ability to spit fireballs.[2] Link must destroy all four of its hands to defeat it. Each hand has a health of 4, totaling the beast at 16 health. Manhandla is immune to the Boomerang and Fire. Link can damage it with his Sword, Arrows, the Magical Rod, or Bombs. Bombs are effective, as one Bomb is strong enough to destroy a hand, allowing Link to destroy all four hands with one Bomb if it detonates in its center. As each hand is destroyed, the Manhandla increases its speed and spits fireballs at a faster rate.[3] The Magical Shield cannot defend Link from Manhandla's fireballs. When Manhandla is accompanied by Stone Statues, the Statues also increase their rate of fire as each hand is destroyed. When defeated, Manhandla will drop a Heart Container and may drop either a Heart, a Fairy, or one Rupee.[note 1]

In Oracle of Seasons, Manhandla is the boss of the Ancient Ruins, the sixth dungeon.[5] Manhandla starts out by spitting four fireballs at Link. The flowers can only be damaged by the Magical Boomerang when they are open. When Manhandla loses all four flowers, it runs around the room very fast. Link has to continually hit Manhandla with the Magical Boomerang to expose its core. At that point, Link has a small amount of time to use his Sword to destroy Manhandla's core and defeat it. Link receives a Heart Container and the Blowing Wind, the sixth Essence of Nature, for destroying Manhandla.

Note that the body is now a large Buzz Blob, very similar to the Giant Buzz Blob mini-boss from the Color Dungeon in Link's Awakening and to the Big Green Chuchu boss of the Deepwood Shrine in The Minish Cap. Also note that the four plant heads now look and act very similar to the Mario series's Piranha Plant, reflecting its origins as a relative.

In Four Swords Adventures, Manhandla appears in The Coast, Frozen Hyrule, and Realm of the Heavens, as either a Boss or Mini-Boss. The strategy is the same as in The Legend of Zelda, but the claws are different colors, and the Link of the corresponding color must strike the claw to destroy it. It takes one hit to weaken each claw, but if one of the Links get struck by it or hits the wrong head, Manhandla will spit fire from all four heads and they will grow to full size again. The Links must to repeat the process in that case. Once all the claws have become smaller it will be destroyed.

Manhandla also makes an appearance in BS The Legend of Zelda. The first time it shows up is in Level-3 as the Boss, then it returns in the seventh dungeon as a mini-boss. The battles play out in a similar manner to that in The Legend of Zelda, minus the fact that Manhandla is much faster and requires fewer blows to defeat.

After Link defeats Blaino in the Oracle of Seasons manga by Akira Himekawa, a Keese flies off to inform General Onox that the hero bears the sacred mark on his hand.[6] It first tells a crow,[7] who in turn drops a seed that sprouts. As Link, Piyoko, and Ricky wander through the forest, Manhandla bursts from the ground.[8] One of Manhandla's heads swallows Piyoko, trapping the chick inside it.[9][10] Ricky attacks Manhandla with his tornado punch and frees Piyoko.[11] Link tells Manhandla that he cannot let the forest be overtaken by monsters like it.[12] However, Link and his companions are proven to be no match for the plant monster and are soon tangled in its vines. Link reaches for one of the seeds that the Maku Tree had given him and tosses it into one of Manhandla's open mouths.[13] The seed turns out to be an Ember Seed, causing Manhandla to burst into flames.[14] 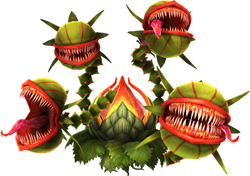 In Hyrule Warriors, Manhandla appears as a Giant Boss that is encountered in several Legend Mode and Adventure Mode stages. In Legend Mode, it appears as a Boss in the Scenarios "The Sorceress of the Valley", "Ganondorf's Return", and "Darkness Falls".

As with previous incarnations, Manhandla appears as a bulb with four heads, however, its heads and body are covered in a sturdy metallic hide that deflects attacks. Manhandla has several different attacks, including spitting seeds that target the Allied base, rapidly spitting seeds directly at their enemies, lunging with its huge jaws, uprooting itself and rampaging around the battlefield with its heads swinging around, or spewing a pool of poison similar to Deku Babas. These attacks will also harm nearby enemy troops. Occasionally however, its heads will briefly lose their metallic hide and become organic, leaving its heads vulnerable. In this window of time, its heads can be stunned with the Boomerang. When all four heads are stunned, the creature falls and exposes a large crystal in its bulb, revealing its Weak Point Gauge. Sometimes Manhandla will still expose its Weak Point Gauge even without all of its heads stunned, but this is very uncommon occurrence. Manhandla will usually drop the Toxic Dust Material when defeated, and rarely, the Manhandla's Sapling Material.